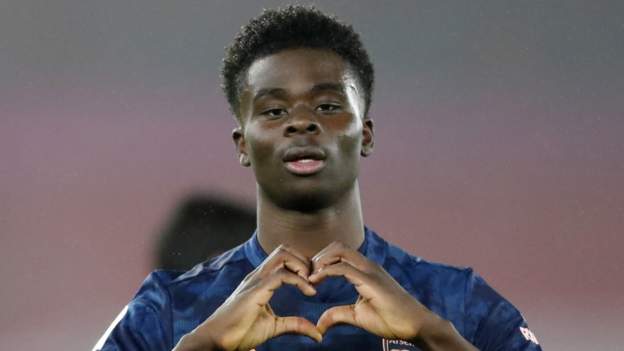 Teenager Bukayo Saka scored a wonderful goal as Arsenal continued their excellent run of league form by coming from behind to beat Southampton in an eventful game.

After Alexandre Lacazette missed a glorious chance to give the Gunners a first-minute lead, Stuart Armstrong put Southampton ahead from a wonderful delivery by captain James Ward-Prowse.

But the lead lasted just five minutes, as Nicolas Pepe equalising with a neat finish, before both sides created clear chances.

Former Saints defender Cedric Soares volleyed narrowly wide at one end while Bernd Leno produced a flying save to keep out a header by Che Adams at the other.

England winger Saka put the Gunners ahead after going past keeper Alex McCarthy, who had come rushing out of his penalty area, before the 19-year-old picked out Lacazette to seal the points.

When they were held 1-1 by Southampton at Emirates Stadium on 16 December, Mikel Arteta’s side were anchored 15th in the table and trailed the Saints by 10 points.

This latest impressive win lifted them above Ralph Hasenhuttl’s side and up into eighth spot, five points off a top-four spot.

Arteta’s team is finally starting to produce results, with a fifth win in six league games easing the pain of Saturday’s FA Cup exit at the hands of Southampton, while building further momentum before Saturday’s intriguing home game with high-flying Manchester United.

In an eventful match, Arsenal were at their attacking best at St Mary’s.

Saka once again showed why he is being touted for a big future with an energetic performance, which he capped with a fine goal, while Granit Xhaka and Lacazette also created goals.

Arsenal, who are close to signing attacking midfielder Martin Odegaard from Real Madrid on loan, are still a long way from where Arteta wants them to be.

But there are clear signs the Gunners, who lost Thomas Partey to injury, are heading in the right direction after taking 16 points from the past 18 on offer.

Only Man City have won more points (18) and conceded fewer goals (one) than Arsenal in the Premier League since 26 December.

Arteta’s players left the pitch wearing big smiles – a far cry from earlier in the season when they struggled to put a run of wins together.

Southampton reach the halfway stage of their season with a healthy 29 points but it is now one win in seven top-flight games for Hasenhuttl’s side.

There is much to admire about the way they have gone about their business but this was an off-day as the Saints slipped to 11th in the table.

It might have been a different outcome but for Leno, with the Arsenal keeper making excellent saves to keep out Adams and, late in the game, a Ward-Prowse free-kick.

Armstrong’s goal had given them the perfect start but Arsenal found plenty of space down the left hand side as they picked off the hosts.

The Saints went into the game on the back of five clean sheets in six games but struggled at the back against Arsenal without the presence of the suspended Ryan Bertrand and the injured Kyle Walker-Peters.

There will be no panic at St Mary’s – and rightly so. But Hasenhuttl will be desperate his side return to winning ways sooner rather than later.

Both teams are back in Premier League action on Saturday, with Southampton hosting Aston Villa (20:00 GMT) after Arsenal’s home game with Manchester United (17:30).