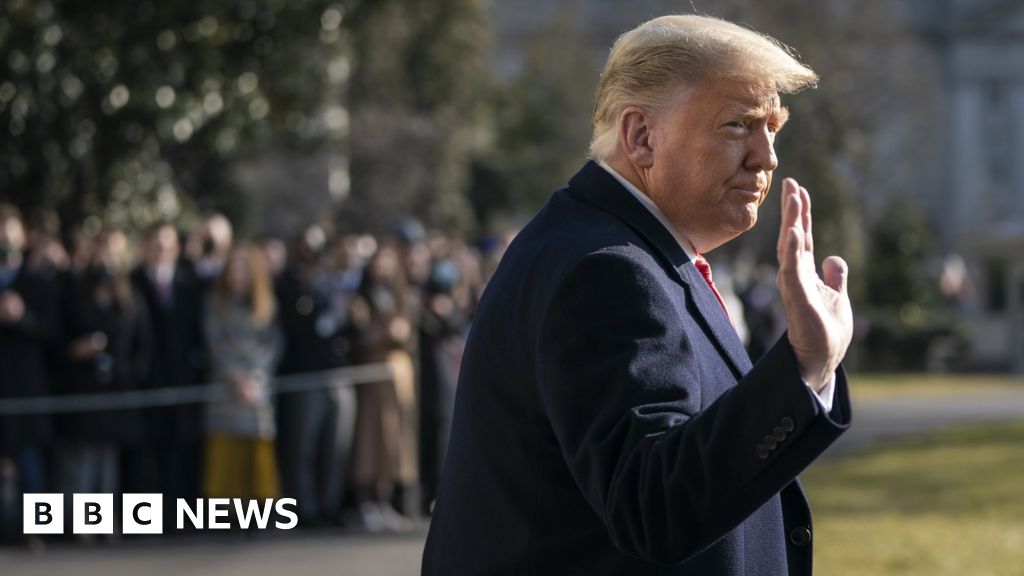 Donald Trump has been impeached – again. So what now?

The former president is the first in US history to have been charged with misconduct – or impeached – twice by the lower chamber of US Congress.

The Democratic-controlled House of Representatives accused Mr Trump of encouraging violence with his false claims of election fraud and egging on a mob to storm the Capitol on 6 January.

Some Republicans also backed impeachment in that historic vote.

Mr Trump, a Republican, now faces trial in the upper chamber, the Senate.

A two-thirds majority in the Senate means a conviction.

If Mr Trump is convicted, senators could also vote to bar him from ever holding public office again.

OK, when is the trial?

It is set to start next month.

On 25 January, the Speaker of the House, Nancy Pelosi, sent the article of impeachment – the charge of incitement laid out and approved by the lower chamber – to the Senate.

According to the Constitution, that triggers the trial proceedings to begin by 13:00 (local) the following day.

But the new Senate majority leader Chuck Schumer has agreed to a request from the Republican leader, Mitch McConnell, for more time. So the trial itself will begin on 9 February.

Can he be tried now he has left?

It’s never happened before, so it’s untested and the US Constitution doesn’t say.

Impeachment proceedings against President Richard Nixon were ended when he quit in 1974.

So Mr Trump could take his case to the Supreme Court, claiming his trial was unconstitutional.

Some lower ranked officials have been impeached after leaving office.

Would Trump be convicted in the Senate?

Democrats only hold half the 100 seats so they would require 17 Republicans to vote against someone from their own party.

That’s a high bar for a party that has largely remained publicly loyal to Mr Trump.

But 10 Republicans in the House supported impeachment and a couple of senators have indicated they are open to it.

Even Mitch McConnell says he has not yet made up his mind how he will vote.

Could Trump run for president again if convicted?

If he is convicted by the Senate, lawmakers could hold another vote to block him from running for elected office again – which he had indicated he planned to do in 2024.

This could be the biggest consequence of this impeachment.

If he is convicted, a simple majority of senators would be needed to block Mr Trump from holding “any office of honour, trust or profit under the United States”.

So 50 senators plus a casting vote from Vice-President Kamala Harris would be enough to damn Mr Trump’s hopes of political power.

This could be appealing to Republicans hoping to run for president in the future and those who want Mr Trump out of the party.

What about other benefits?

There has been talk of Mr Trump losing benefits granted to his predecessors under the 1958 Former Presidents Act, which include a pension and health insurance, and potentially a lifetime security detail at taxpayers’ expense.

However, Mr Trump is likely to keep these benefits if he is convicted after leaving office.

What was his first impeachment for again?

That was over his dealings with Ukraine, although he denied any wrongdoing.

He was accused of pressing the country’s leader to open an investigation into Mr Biden, then his emerging rival for the White House, and his son Hunter.

Mr Trump appeared to use military aid as leverage. He was impeached by the House and cleared by the then Republican-controlled Senate.