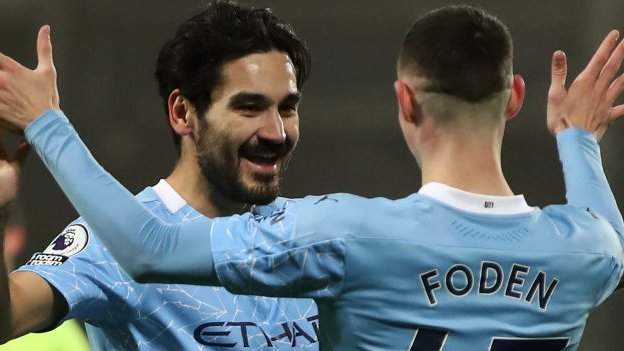 Manchester City climbed to the top of the Premier League by handing West Brom another home hammering.

No team in Europe’s top five divisions has conceded as many goals at home as Sam Allardyce’s Albion and they were ruthlessly exposed again by a brilliant attacking display.

For the second week running City were the beneficiaries of a contentious offside call but there can be no doubt that they would have routed the hosts regardless.

Ilkay Gundogan continued his inspired run in front of goal with two excellent strikes, Joao Cancelo scored while an offside flag was raised and several players seemed to stop, and Riyad Mahrez powered in a fourth before the break.

Raheem Sterling got in on the act in the second half as City ended a day on top of the table for the first time this season.

Defeat left 19th-placed West Brom six points adrift of safety going into a massive game against Fulham on Saturday – live on BBC One, the BBC Sport website and the iPlayer.

City were without Kevin de Bruyne, Sergio Aguero and Gabriel Jesus – introduced at 5-0 – and had no out-and-out forward in their team, and still could have scored more goals in an 11th straight win.

Phil Foden had already had a shot turned on to the post when the superb Gundogan controlled a pass over the top, swivelled and clipped the ball into the far corner in one fluid movement.

Sian Massey-Ellis flagged Bernardo Silva offside as he was played in down the right. His cutback to Cancelo was chipped into the top corner, with the flag still raised and some players stationary.

A VAR check confirmed Bernardo was in fact onside and the goal stood, to Allardyce’s disbelief.

“Listen we all make mistakes,” he said. “She made a mistake and put her flag up too soon.

“You can’t tell me that rubbish about playing to the whistle, that’s nonsense, if the flag goes up you naturally stop. But saying that, she made one mistake. We made far more today.”

Just hours before kick-off authorities sought to clarify a quirk to the offside law that had allowed Silva to score a highly controversial goal for City against Aston Villa in their 2-0 win last week.

Any controversy about this one was short-lived though as Gundogan again demonstrated brilliant awareness to take the ball off Romaine Sawyers inside the area and drive home a seventh goal in eight Premier League appearances.

Mahrez thundered in a fourth, Sterling had a tap-in and Rodri pummelled the crossbar. Could City be champions again? They will take some stopping from here.

‘We have a problem at the Hawthorns’

City boss Pep Guardiola called Allardyce “a genius” before the game but his impact on Albion has been anything but inspired.

It is just six weeks since Albion held City to a draw in Manchester on a night when goalkeeper Sam Johnstone excelled.

That result left City in sixth place with West Brom two points from safety. Slaven Bilic was sacked in the aftermath and West Brom’s defensive record has been appalling since.

In their past five home games Albion have shipped 22 goals – including five on three separate occasions – a record for any five top-flight games since Aston Villa in December 1935.

“Seeing what we did today was upsetting,” Allardyce told BBC Sport. “I didn’t think I’d see a performance like that and it appears we have a problem here at the Hawthorns.

“Away we have been pretty good and picked up points but here, the last three home games have not been good enough.

“I thought I was coming into the game with more hope and it didn’t happen. I wish I knew why. There is no pressure from the fans because there aren’t any. It’s remarkable.”

There is no disgrace in losing to a City side in such form, of course, but Allardyce will be in danger of seeing his side cut adrift if he does not make a difference soon.

The former England manager did not face the media until after 23:00 GMT following a lengthy team meeting.

“A few home truths needed to be said – it had to be done now because there’s a short period of time before the next game,” he said.

“I could have been more angry. I kept my composure to try and get my point across about the errors we made to allow City to win so comfortably. I can accept defeat but not like that.”

‘Play to the whistle’

Former England defender Stephen Warnock, discussing Man City’s first goal on BBC Match of the Day: “Sian Massey-Ellis puts her flag up a bit early because the phase of play hasn’t been completed.

“A lot of the players look along and they see that flag and shut off. You can see Romaine Sawyers with his arm up. Then they have to react because the whistle hasn’t gone. But that should be the first thought: ‘whistle hasn’t gone so we should carry on.'”

West Brom have that relegation clash with Fulham on the BBC on Saturday (15:00 GMT), while City could do them a small favour when they host bottom side Sheffield United at the same time.