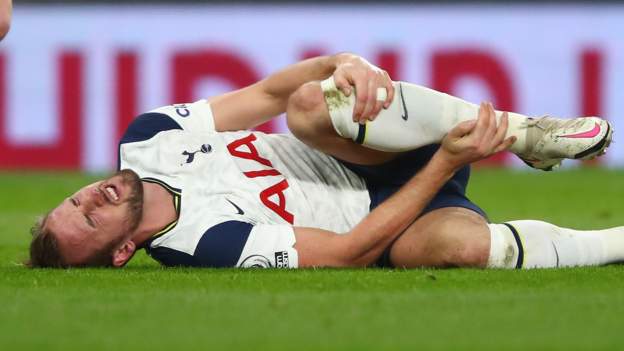 Tottenham’s Harry Kane could be out for a “few weeks” after injuring both ankles in the Premier League defeat by Liverpool, says his boss Jose Mourinho.

Kane, 27, needed treatment on his left ankle after landing awkwardly following a challenge with Jordan Henderson.

The striker, who has a history of ankle issues, continued before being replaced by Erik Lamela at half-time.

“The second injury was worse than the first one,” said Mourinho. “He was coping with one but couldn’t cope with both.

“For Harry to leave a game when the team is losing is not a nothing injury.

“There are some players you can’t replace. When it happens it happens, but I believe we have to fight against it, we cannot do anything else.”

Kane has spent considerable time on the sidelines with a number of serious ankle injuries in recent seasons.

The striker was ruled out for two significant spells in the second half of the 2018-19 season, missing seven games when he damaged ligaments in his left ankle in January 2019 and then nine more matches with a lateral ligament injury sustained in April.

In 2017-18, he missed a month with a similar injury to the right ankle, and endured separate absences of six and four weeks during the 2016-17 campaign.

“You just hope it’s not going to be ligament damage that will put him out for a long time because he’s been absolutely phenomenal this season – his contributions, his passing, goals and assists,” said former Spurs defender Stephen Kelly on BBC Radio 5 Live.

“He’s been the all-round complete forward and unplayable at times. Tottenham just can’t afford to lose him.”

We were punished by our own mistakes – Mourinho

Kane’s injury compounded the misery for Mourinho, who saw his sixth-placed side beaten 3-1 by Liverpool at the Tottenham Hotspur Stadium.

With a point separating the teams going into the game, Spurs knew they would climb back into the top four with a win.

But they fell behind on the stroke of half-time when Roberto Firmino tapped Liverpool in front after Spurs pair Hugo Lloris and Eric Dier hesitated rather than dealing with Sadio Mane’s low cross.

Lloris’ weak push out allowed Trent Alexander-Arnold to drill in the second before Pierre-Emile Hojbjerg’s stunner gave Spurs a glimmer of hope.

But Mane lashed in a third, after Spurs defender Joe Rodon failed to clear, to seal a deserved win for the visitors.

“We were punished by own mistakes,” said Mourinho.

“To go 1-0 down, not easy, To lose Harry, not easy. And, in the first minute of the second half, to have another defensive mistake, at 2-0 it is mentally difficult to resist.

“But we had a good reaction, in the opposition half, and then another mistake – this time from a young boy [Roden] who played so, so well.

“But I have to praise the guys who stayed on the pitch because they tried until the end.”