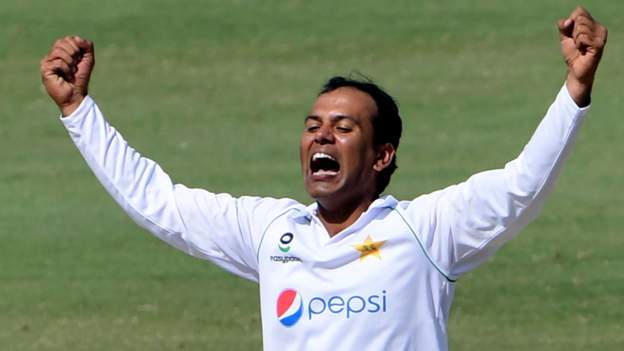 Debutant Nauman Ali took 5-35 as Pakistan wrapped up a seven-wicket win over South Africa with a day to spare in the first Test in Karachi.

Resuming on 187-4, South Africa were bowled out for 245 thanks to slow left-armer Nauman and leg-spinner Yasir Shah, who finished with 4-79.

Azhar Ali hit an unbeaten 31 as the hosts easily reached a target of 88 before tea.

The final Test in Rawalpindi starts on Thursday, followed by three Twenty20s.

The tone for the day was set when nightwatchman Keshav Mahraj was bowled by Hasan Ali with the first ball of the morning.

Quinton de Kock soon followed, the captain managing only two before being caught by Abid Ali at short leg off Yasir.

Temba Bavuma offered some resistance with a gritty 40 off 93 balls, which included a 42-run stand for the seventh wicket with George Linde.

Having lost three wickets for 10 runs on day three, South Africa suffered their second mini-collapse of the innings as 34-year-old Nauman cleaned up the lower order.

Linde was caught smartly by Imran Butt at leg slip for 16, Kagiso Rabada was bowled through the gate and Anrich Nortje sliced to backward point.

Bavuma was trapped lbw as Nauman completed his five-wicket haul to finish with match figures of 7-73.