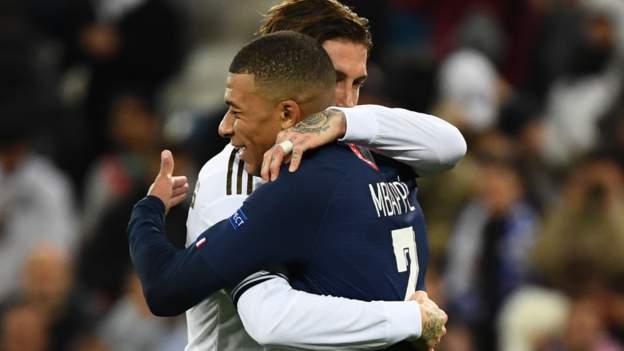 Paris St-Germain striker Kylian Mbappe has been linked to Real Madrid for most of his professional career, but could he sign a new contract to commit his future to the French club?

He went to PSG instead, on a loan deal which became a £165m transfer, and is already their all-time fourth top scorer with 106 goals.

Mbappe is in contract talks with PSG – he only has 18 months left on his deal.

After scoring twice last Friday in a 4-0 win over Montpellier he said: “I am thinking about it [the new deal], because if I sign, it will be in order to invest myself in the long term.”

The question is whether Real Madrid, like everyone else affected by the coronavirus pandemic, could afford to prise him away from his hometown club.

“Real almost got him before he went to PSG. It’s their dream to get him,” Spanish football journalist Guillem Balague said on BBC Radio 5 Live’s Football Daily podcast.

“The problem for Real Madrid is at PSG they want to equal the wages Neymar has – about 37m euros a year – and Real Madrid cannot afford that.

“They say they will pay the cost of bringing him there and about 21m euros – what he earns now – and instead of 50% match rights, which is what most new players get, he can have more – and see if that makes up for what he’d earn at PSG.

“Hence in my eyes Mbappe after the Montpellier game saying if I stay at PSG it will be a long contact, opens the door more than ever to staying, it feels.”

‘I don’t believe him’ – could Mbappe go in two years?

Mbappe has said if he does sign a new deal at PSG, it is because he plans to stay at the club for a long time.

But French journalist Julien Laurens does not think that is the case.

“He can easily extend and then go to Real Madrid in two years’ time when they have more money. Maybe his cycle in Paris will be finished by then and he’ll still only be 24. Plenty of time.

“Even if he’s very young, if Madrid don’t really have the money for the transfer fee plus the wages plus the image rights, maybe he’ll think let’s renew, stay two more years and Real Madrid can always come back.”

Mbappe has won all three Ligue 1 titles, plus two French Cups and two League Cups, in his time at PSG.

But the one which got away was the Champions League. PSG lost last year’s final 1-0 to Bayern Munich – with Mbappe guilty of a bad miss.

“The way he was talking [in the past] was like he wanted to go because he was saying things like ‘I will always be grateful to the club and fans because they have been so good to me, this is my home’, which they usually say when they’re about to leave,” said Laurens.

“I can see why he’ll be torn between the two [staying and leaving].

“You can see why he’d want to stay and finish what he started and win the Champions League for them. Then he can go anywhere, Liverpool or whoever, whatever he wants to do.”

Another factor is the chance to work with new manager Mauricio Pochettino. The former Spurs boss replaced Thomas Tuchel, now Chelsea’s boss, at the start of the year.

“I think he wants to work with Pochettino,” said Laurens. “It has started really well between the two. Maybe he’s thinking it’s looking good what we have right now.”