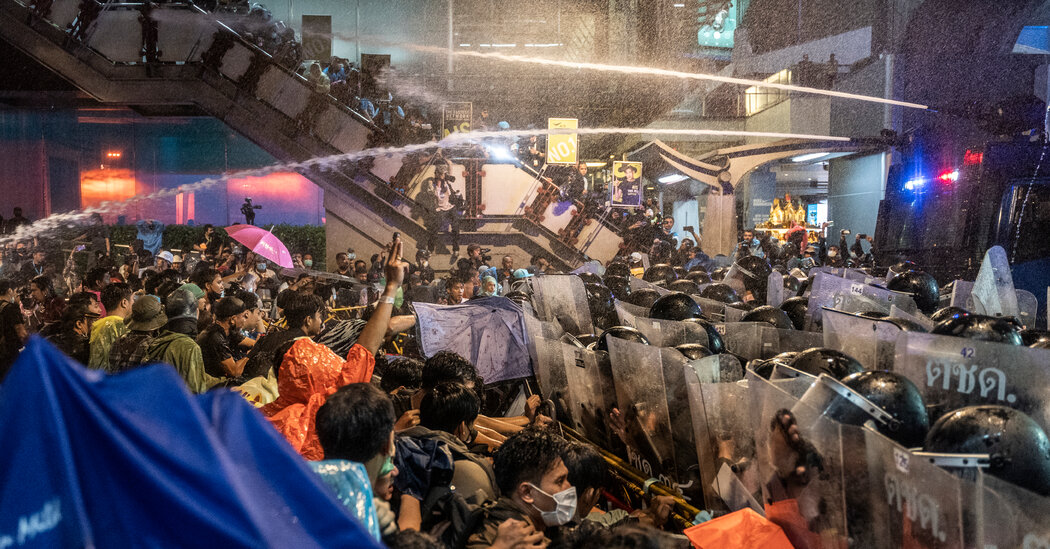 BANGKOK — A 16-year-old boy is facing possible jail time for parading down a makeshift catwalk in a crop top that evoked Thailand’s king. An actress stands accused of breaking the law by cheering on and delivering spicy takeout to hungry members of the country’s protest movement.

And another offender has been informed that selling a calendar decorated with a rubber duck could earn him 15 years in prison.

Hundreds of thousands of people marched in Thailand’s student-organized protests last year to demand reforms to the government and monarchy. But the democracy movement, armed with little more than duck-shaped pool floats to use as shields against water cannons, is now battling a serious threat to its mission: a raft of criminal prosecutions in recent weeks that could end with rally leaders and ordinary protesters alike locked up for decades.

After allowing the street rallies to continue largely unimpeded for months, Prime Minister Prayuth Chan-ocha of Thailand appears to have lost patience, threatening to use “all laws and all articles” against the dissenters. Since November dozens of protesters have been accused of breaching a feared lèse-majesté law that punishes those who insult senior members of the royal family with jail time, according to the group Thai Lawyers for Human Rights. Use of the law had been suspended for nearly three years, and the reintroduction of its sweeping dragnet has earned Thailand the condemnation of the United Nations human rights agency.

Several young protesters have as many charges laid against them as years they have been alive, even as the discontent that drove the street rallies remains unaddressed. Some were seized by security forces in the middle of the night and hauled to police stations.

“They look at the protesters as the enemy,” said Tattep Ruangprapaikitseree, one of the rally organizers, referring to the government’s mounting legal campaign against democracy advocates. “If they continue to use this method, the protests will keep growing, and it will never end.”

Recently Thanathorn Jungroongruangkit, a leader of the political opposition who questioned how a company tied to the king won a contract to produce a coronavirus vaccine, was slapped with multiple counts of defaming the monarch. Each charge is punishable by three to 15 years in prison. A woman who posted audio deemed insulting to the monarchy was sentenced in January to 43 years in prison.

“If this law keeps going, the holiness of the law and the legal process will diminish,” said Jutatip Sirikhan, a student protester who was charged with insulting the monarchy in a speech she gave in September. “I don’t think what I said is wrong because what I said was based on the facts.”

Other protesters have been charged with sedition and engaging in “an act of violence against the queen’s liberty,” an obscure section of the criminal code that could mean life imprisonment for offenders. The act, in this case, was shouting at a motorcade carrying Queen Suthida Vajiralongkorn Na Ayudhya, the king’s fourth wife.

On Thursday, three high school students appeared at the Central Juvenile and Family Court in Bangkok to face charges of contravening a state of emergency that was briefly imposed to quell the rallies last fall.

“The government does not act according to a democratic system,” said Patsaravalee Tanakitvibulpon, a university student who was summoned last month on two lèse-majesté counts and faces seven other charges. “The government is using the law to shut us up, not allowing us to talk.”

The rallies began last spring with students pushing for changes to school uniform rules, then broadened to express revulsion at the growing number of Thai dissidents who have disappeared while in exile overseas. (Some of their bodies were later found.)

By the summer, protesters, who gathered every few days despite fears of an army crackdown, were calling for the resignation of Mr. Prayuth, a former general who led a 2014 coup, and for the monarchy to come under the Constitution.

The demands have not been met, nor are they likely to be taken seriously by the political establishment. Mr. Prayuth is still in charge. The king, one of the world’s richest, continues to float above the national charter.

Efforts to overhaul the Constitution have sputtered in Parliament, hampered by a Senate that is entirely unelected, a feature of the very same military-drafted charter that the protesters want changed.

“Reforming the monarchy, this will not happen,” said Pareena Kraikupt, a lawmaker for the governing Palang Pracharat party. “Thailand has a king who is beloved and most respected with all our lives.”

Ms. Pareena cautioned against ditching the Thai practice of venerating the monarchy. She made a comparison to France, where she said a push to breach certain Muslim traditions had created the conditions for violence.

“It’s a tradition, culture,” Ms. Pareena said. “Like with Muslims, you touch Allah, then look at France, you have a mass shooting and the journalists were killed. You have to understand the traditions of each group of people.”

On Friday, a lawmaker from Ms. Pareena’s party threatened to pursue lèse-majesté complaints against opposition members of Parliament who had added references to the monarchy to a motion to censure the prime minister.

One of Mr. Prayuth’s rationales for orchestrating the 2014 coup — one of around a dozen successful putsches since Thailand abolished absolute monarchy in 1932 — was that the royal family was being menaced by members of the government at the time, a charge the politicians have denied.

For decades, under the rule of King Bhumibol Adulyadej, who was the longest-reigning monarch in the world until his death in 2016, royal criticism had been confined mostly to whispers. The rare outbursts were treated harshly. Someone was once jailed for making fun of King Bhumibol’s dog.

But as the protests grew in force last year, speaker after speaker broke the royal taboo, directly questioning why a constitutional monarchy has a king who is not strictly bound by the Constitution. By the fall, protesters felt emboldened enough to scrawl graffiti mocking the king on the streets of Bangkok. A daring few wore crop tops, an article of clothing that the king, 68, has been photographed wearing in Europe. Some such images have been blocked by Thai internet censors.

“The youth, in speaking out about the monarchy, are making a wager against the past: Thailand has changed and all public institutions, including the monarchy, are open to public criticism and scrutiny,” said David Streckfuss, a historian who has studied the application of lèse-majesté in Thailand.

The spray-painted messages addressed the monarch’s intricate personal life — four wives, several disinherited children and a mistress who appears increasingly by his side at public events — as well as his moves to build up the palace’s power by consolidating control over military regiments and royal finances.

Protesters asked why the king has spent much of his reign living in luxury in Germany, surrounded by a retinue of attendants, while Thais suffer from the economic effects of the coronavirus. The awarding of a vaccine-making contract to a company linked to the king has also prompted questions about transparency.

“The monarchy has been with the Thai people for generations, and it is the root of Thai culture,” said Ms. Patsaravalee, the university student facing lèse-majesté accusations. “But if one day the thing that unites the hearts of the Thai people creates a bad image of the country, can we stand it? It is one of the people’s duties to speak up and reform it.”

In November, King Maha Vajiralongkorn returned to Thailand for his longest stay since he ascended to the throne in 2016. News broadcasts have stepped up coverage of the monarch’s visits to hospitals and schools, accompanied by either the queen or his mistress, who has been given the official title of royal consort.

The student protest organizers, who enlivened their rallies with Harry Potter wands, “Hunger Games” salutes and the rubber duck floats, say they will wait for a recent surge in coronavirus infections to wane before taking to the streets again. But they have vowed to keep pressing for change.

“I look at the movement last year as fireworks and firecrackers that made a big noise and bright lights,” said Mr. Tattep, who graduated from Chulalongkorn University with a degree in political science last year. “This year, after the celebration with those fireworks, we will continue.”

“That’s our homework,” he added, a student to the end.