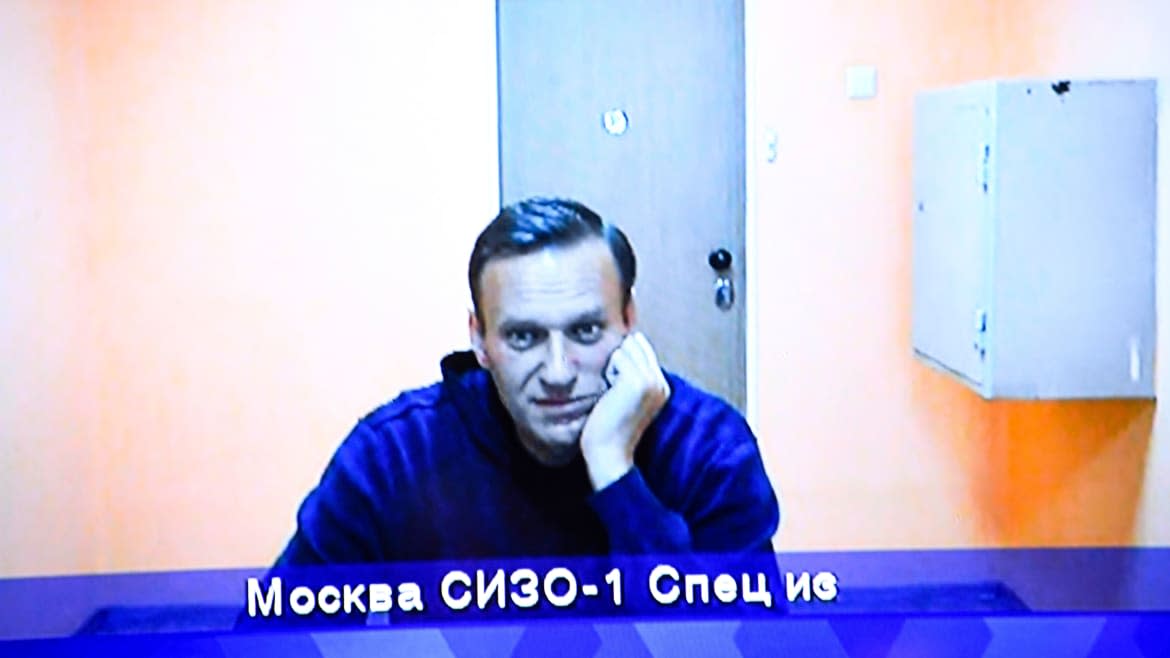 Alexei Navalny, the main rival of Russian President Vladimir Putin who was poisoned with a deadly nerve agent last summer—allegedly by the FSB—was sentenced to 2 years and 8 months in prison (subtracting time served under house arrest from the total prison term of 3 years 6 months imposed by the court) over trumped-up charges by Russia’s Federal Penitentiary Service.

Russian authorities alleged that by receiving medical treatment in Germany after being poisoned with the nerve agent Novichok, Navalny violated the terms of a suspended sentence in a contrived embezzlement case in 2014. Navalny’s suspended sentence ended in June 2018 and his probation period concluded on December 30, 2020. Nonetheless, the charging officials faulted Navalny for not returning to Russia immediately upon coming out of a coma, even though his medical treatment continued for months thereafter. Navalny returned to the country in mid-January and was immediately placed under arrest.

Appearing in court on Tuesday, Navalny pointed out that Putin himself knew where he was, having boasted about allowing the opposition activist to travel to Germany for medical treatment. Navalny’s attorney, Vadim Kobzev, told the court: “The whole country, the whole world knew where he was.” The New Times, an independent Russian weekly news magazine, aptly summed up the situation: Navalny is on trial simply for surviving the poisoning. Speaking in court during Tuesday’s hearing, Navalny outlined the true meaning of the proceedings: “They’re imprisoning one person in order to scare millions of others.”

If you ask Margarita Simonyan, editor-in-chief of the state-funded network RT that passes for news in the United States, prison is not a harsh enough punishment. Simonyan explained her shocking views during Monday’s broadcast of The Evening with Vladimir Soloviev on Russian state TV channel Rossiya-1. “I’m proud of my Motherland,” she exclaimed and argued that those who attempt to undermine the regime must be harshly dealt with and immediately imprisoned. Simonyan described Navalny as “a traitor of the Motherland.”

She added: “We don’t know who poisoned the Skripals [Sergei and Yulia] or [Alexander] Litvinenko, we don’t know whether Russia did this or not. But let me say something savage and unpopular. Who were Skripal and Litvinenko? Traitors of the Motherland… And what large country would allow the traitors of the Motherland to walk around without punishment?” Simonyan concluded: “I’ll tell you a scary thing: if I found out and received the evidence that [the poisonings] were the handiwork of intelligence services against the agents of other intelligence services, I wouldn’t mind that a bit.”

The Skripals and Litvinenko were poisoned, allegedly by agents of the Russian state, in Britain. The former survived their poisonings while Litnivenko died in 2006 from radiation sickness.

During the same show, the host Vladimir Soloviev and various panelists referred to Alexei Navalny as “a traitor” and baselessly accused him of working for Western intelligence agencies. The inescapable conclusion is that the Kremlin’s mouthpieces are laying the groundwork for justifying the fate that they believe awaits Navalny, however horrific it may be.

Navalny’s biggest crime in the eyes of the Kremlin is symbolizing the idea that the people can choose a leader besides Putin, or to even have an option to decide for themselves. Russia’s fearless opposition leader inspired multiple demonstrations against government corruption, which led to massive turnouts across Russia and ended with the arrests of an unprecedented 5,000 people, including 82 journalists. Kremlin press secretary Dmitry Peskov rejected White House calls for Navalny’s release and Secretary of State Antony Blinken’s condemnation of a violent crackdown by Russian authorities against peaceful protesters. “As to the statements made by U.S. representatives on the unlawful demonstrations in our country, I repeat that we are not ready to accept and listen to such statements of the Americans and will not do so,” Peskov stressed.

Appearing on The Evening with Vladimir Soloviev, Dmitry Kulikov, member of a club of experts organized by the state TV network Russia Today, deciphered Peskov’s message as he understood it. Kulikov explained that Peskov was diplomatically telling Blinken: “Get the hell out of here, we couldn’t care less about anything you have to say about this. We will pay no attention to you anymore.” Gone are the days when experts on Russian state television adoringly recounted the signs of former U.S. President Donald J. Trump’s apparent subservience to Russian President Vladimir Putin. In contrast to calling Trump “ours” and lovingly referring to him as “Trumpushka,” Russian state media personalities exhibit open hostility towards the newly elected U.S. President Joe Biden and his administration.

Russian state media accused Western countries, including the United States, of fomenting another “color revolution” in Russia—the prospect that clearly unnerved the Kremlin. Speaking to students in a televised exchange, Putin recounted various events in Russian history, such as the revolution of 1917 and the fall of the Soviet Union and cautioned against “destabilizing society and the government,” which he said could make things go from bad to worse. Drawing the parallels to the revolution of 1917, Russian state television show Vesti Nedeli warned the viewers that revolutions inevitably end in “blood, bitterness and poverty.”

Margarita Simonyan described the U.S. State Department’s commentary about the Russian protests as “the funniest thing.” She ludicrously described Russia as “the most liberal country” out of all civilized nations. “We need to be harsher,” the head of RT argued, as she called on “brothers” in Russian law enforcement to crack down on the unruly protesters. Simonyan scoffed at the demonstrators who dared to chant about the power of the people and retorted with a view undoubtedly shared by the Kremlin: “No, that’s nonsense. You’re not the power here.”