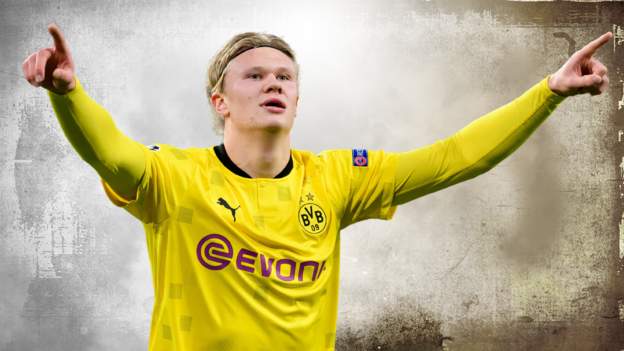 With the January window closed, all transfer talk now focuses on the summer – and, with that, comes the question of whether Erling Braut Haaland will leave Borussia Dortmund.

A move to the Premier League has long been mooted for the Norway international, much of this owing to his father Alfe-Inge’s successful playing career in England.

“One day, Erling wants to play in the Premier League,” his father has said. “I don’t know when the timing will be ideal.”

So, if Haaland were to venture to England, which side would suit him best and which club would benefit the most?

Aside from his father’s playing connection with the club, there is a sense next summer could be the transfer window Manchester City end their four-year period without signing a striker.

Sergio Aguero’s contract expires at the end of the season and Gabriel Jesus’ inconsistencies and injuries mean City cannot rely on him to be the sole replacement for the Argentine.

Jesus’ finishing has been one of the main concerns – since the start of last season the 23-year-old has underperformed his Premier League expected goals tally by 6.97goals(in short, he has scored seven fewer goals than would be expected from the chances presented to him).

In contrast, Haaland is overperforming by 6.83 goals since joining Dortmund, which is almost a 14-goal swing between the pair.

In recent Premier League games, manager Pep Guardiola has opted to play at least one wide man on the flank of his stronger foot.

This has resulted in the team attacking more like they did in the 2017-18 season, when they achieved 100 points. In particular, Phil Foden down the left and Raheem Sterling down the right have been making direct, penetrative runs down the wing, then cutting the ball back into the box.

The duo have been supported by Joao Cancelo, who is also now playing more often at right-back instead of cutting inside from left-back.

This is the type of service Haaland would thrive on with his excellent movement in the box – only one of his 27 Bundesliga goals has come from beyond 12 yards.

A foil for Liverpool’s Salah and Mane?

Recent reports have linked Liverpool with Paris St-Germain striker Kylian Mbappe, but with the possibility that they may have to sell one of their trusted forwards Sadio Mane or Mohamed Salah to fund the move and make room for the Frenchman.

If the Reds were looking to supplement the pair instead, then it is possible they will look Haaland’s way.

Roberto Firmino’s goalscoring – six goals in 19 league starts – has never been his main strength, but there are also concerns over his link-up play and creativity, which has facilitated Mane and Salah’s success for so long.

Haaland’s link-up play is a facet of his game that is evolving.

Take the recent match against RB Leipzig, for example. Julian Nagelsmann’s side had suffocated the service into Haaland in the first half and he had just five touches of the ball.

In the second half, the Norwegian changed his method of attack, dropping deeper and carrying the ball to set up Jadon Sancho’s goal and then contributing in the build-up to his own strike.

This perhaps highlights the fundamental difference between Haaland and Firmino, and could make him a long-term solution.

It is now well documented that Manchester United were heavily interested in signing Haaland from Salzburg 12 months ago, but Dortmund beat them to the punch. United boss Ole Gunnar Solskjaer’s project looks more attractive now.

Anthony Martial has started 11 Premier League and Champions League games at centre-forward this season, and has six goals in those appearances.

When Marcus Rashford has played on the left wing, with Martial as a striker, in a 4-2-3-1 system, they naturally occupy similar areas of the pitch in the inside-left channel and leave United without a central focal point.

Solskjaer recognised this tactical flaw, and sparked a good run of results, by selecting Edinson Cavani as his centre-forward or using Martial and Rashford as a strike partnership in a 4-4-2 diamond system.

With Cavani turning 34 next month and only signed on a short-term deal, there is a strong case to suggest United would benefit significantly from the penalty box presence that Haaland brings through the middle.

He is also the ideal fit for Solskjaer’s heavy reliance on the counter-attack.

Haaland excels at playing on the shoulder of the last defender and exploiting gaps. So well timed are some of his runs in behind that he is now even scoring this type of goal against sides who have sat deeper this season, such as Freiburg, Schalke and Hertha Berlin.

This could provide Solskjaer with an extra weapon in games like January’s 2-1 home loss to Sheffield United, where United struggled for goalscoring opportunities because they were denied the space to counter-attack.

And a potential partnership with Bruno Fernandes, who has completed the most through balls in the Premier League this season (15), would be an excellent stylistic fit.

Werner’s partner in waiting at Chelsea?

The central striking role has remained a contentious position in Chelsea’s line-up this season.

This selection dilemma has reared its head again in Thomas Tuchel’s first two matches since replacing the sacked Lamaprd as manager, with the German opting for Giroud in his first game in charge against Wolves and Abraham against Burnley, before replacing him with Werner at half-time.

Giroud has an impressive scoring record this season (nine goals in 782 minutes – one every 87 minutes) and links up well with his team-mates, but his lack of speed and athleticism can impact Chelsea’s overall structure as a team – as seen in Tuchel’s first game against Wolves, where the Blues often lacked a runner in behind to stretch the defence.

And while Abraham also has a good record in front of goal this term, as well as the athleticism Giroud lacks, concerns remain over the 23-year old England international’s ability to link play with his team-mates in the same way the Frenchman does.

Haaland can potentially solve both Giroud and Abraham’s deficiencies, while also shattering their goalscoring numbers.

Werner’s success at RB Leipzig predominantly came in a two-striker system and signing Haaland could also provide the struggling forward with the optimum conditions to succeed at Stamford Bridge.

Last season, Werner excelled alongside both Yousuf Poulsen and Patrick Schick, players with whom Haaland shares many of the traits of a traditional target man. So a partnership with Werner may be too tempting a proposition for Chelsea to pass up.