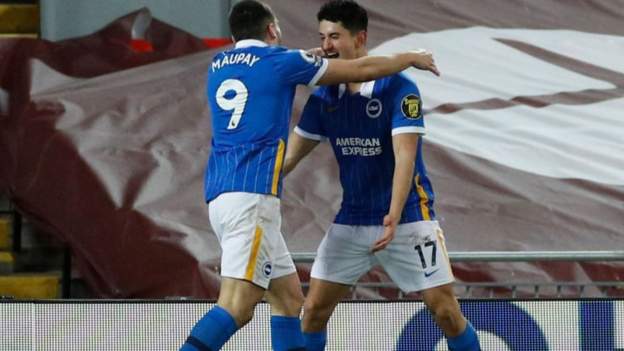 Steven Alzate got a fortuitous but deserved winner for Brighton, who are now unbeaten in four league matches, while the Reds’ recent struggles at home continued.

Liverpool, who are seven points behind leaders Manchester City having played a game more, have not won at home since 16 December and have failed to score in three consecutive games at Anfield for the first time since October 1984.

After going 68 games without a league defeat at their home ground, Jurgen Klopp’s side have now also lost back-to-back games there.

Dan Burn should have put the visitors ahead in the first half, only to slice over the crossbar, but it was the defender’s header across goal that set up the winner.

Nathaniel Phillips could only get a toe to it and the ball deflected off Alzate and beyond stand-in Liverpool goalkeeper Caoimhin Kelleher.

“We fought when we had to – we had to block and defend as a team – but I thought we showed quality when we attacked and courage and bravery with the ball,” said Potter.

“To come here and get the result we have, I think you have got to be close to perfect. I thought we were.

“Fantastic performance. I thought the players were amazing. Such courage, quality, togetherness.”

It lifts Brighton to 15th in the table, while Liverpool slip to fourth after Leicester City’s win at Fulham.

Brighton boss Potter said going to Anfield was “as tough a test as you will get in football”, but it was one the Seagulls rose to superbly.

This was not a smash-and-grab in the style of Burnley’s victory last month, but a controlled and disciplined performance from a side who have now kept four successive clean sheets.

Wing-back Burn caused problems from the left and turned Neal Maupay’s deflected effort over the crossbar in the first half, but showed more composure to nod across goal for Alzate’s first Premier League goal.

Liverpool added more urgency to their game in a bid to find a leveller, but in a game of few chances it was still the visitors who created the better of them.

Kelleher, in for Alisson who was suffering from illness, had to make a smart saves from Leandro Trossard and Pascal Gross to stop Brighton doubling their lead.

At the other end, Potter’s side reduced the champions to just one shot on target as the Seagulls recorded their first league win at Anfield since 1982.

“We needed a little bit of luck, but at the same time I thought we earned that luck and it’s an amazing performance and a fantastic result,” he added. “We contributed to the game, tried to attack, tried to play.

“The three points are really important. We need to carry on. We don’t get too down when things don’t go our way and shouldn’t get too excited when they do go our way. It’s the nature of the league – things turn around quickly.”

Reds struggle to score at home

For almost four years, Liverpool were unbeatable in the league at Anfield, but the Reds have now lost at home to both Burnley and Brighton in two weeks.

Klopp’s side looked to have reignited their title challenge between those defeats with wins at Tottenham and West Ham but, after Mohamed Salah lifted an early chance over the crossbar on Thursday, the recent struggles at home returned.

The Reds have found it hard to break down compact defences and went almost half an hour without even having a shot in the first half, before another long-range Salah effort was blocked outside the penalty area.

Those were the only two attempts Liverpool could muster before the break, their fewest in the first half of any league game this season as they struggled to stretch Brighton.

There was more intent from the hosts after the interval but the closest they came was when Salah fired narrowly wide from Trent Alexander-Arnold’s low, driven cross.

Klopp’s team have not won at home since beating Tottenham on 16 December.

Perhaps more worryingly for the German, they have not scored at Anfield for 348 minutes – since Sadio Mane’s goal 12 minutes into the 1-1 draw with West Brom on 27 December.

It is the first time Liverpool have gone three home leagues game without a goal in more than 36 years, while they become only the second reigning Premier League champion to do so after Manchester United in their final three home games of the 2001-02 season.

Klopp needs to find an answer to his side’s attacking lethargy at home before they welcome a Manchester City side who have kept six successive clean sheets on Sunday.

Liverpool boss Klopp speaking to BBC Radio 5 Live: “Disappointed, nothing to smile about really. Tough one to take. A really tough week – two away games, two very intense games – and tonight we looked really like we weren’t fresh enough mentally and physically.

“A lot of moments where we gave the ball away too easily, in moments the boys looked tired mentally. I know they can pass the ball from A to B but it didn’t happen. We made it easy for Brighton but they also did really well.

“Brighton deserved to win, no doubt about it. For me, it’s more important to find an explanation for why we lost this game and understand what happened here. We didn’t look convincing.”

Brighton manager Potter: “We showed courage when we had the ball and when we didn’t. We defended with our lives. We limited a good team to not too many chances. We had a few ourselves.

“You have to be disciplined here. Huge credit to the players who worked so hard. I can’t speak highly enough of the character of performance – sensational.

“It’s not an easy place to get points. They’re a top team. We’re just trying our best in this league. Every game we face a huge task. It’s one for the supporters and everyone involved in the club. It’s not often a club like us come here and win.”

Liverpool host Manchester City in the league on Sunday (16:30 GMT), while Brighton visit Burnley on Saturday (15:00).