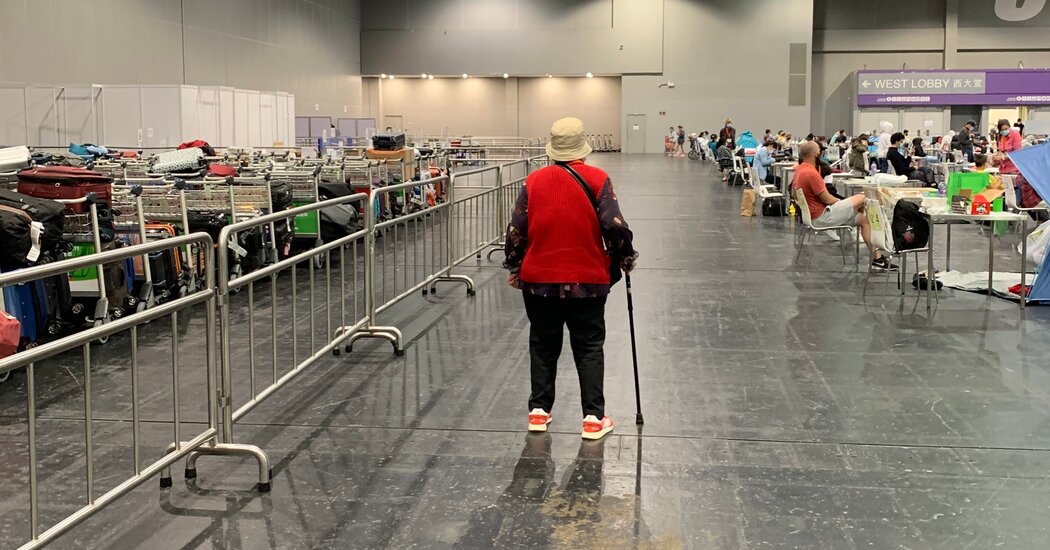 HONG KONG — Bernice Moran and her family thought they knew what to expect when they flew to Hong Kong in October: a coronavirus test on arrival, then an hourslong wait at the airport for their negative results before they could leave to begin two weeks of mandatory quarantine.

Ms. Moran, a pilot, had brought her three children to Hong Kong from their home in Dublin to see their father, also a pilot, for the first time in months.

“As we were awaiting testing results, a couple of nurses — head-to-toe in hazmat suits — came over to me and said, ‘Which one is Zara?’” Ms. Moran recalled. “I looked at them in shock, and it went from a happy day to one of the worst days of my life.”

Zara had tested positive for the coronavirus. In accordance with Hong Kong’s rules, she would be sent to a hospital for two weeks, while Ms. Moran and her two other children, 5 and 11, would go to a separate quarantine camp.

It was Zara’s 8th birthday.

“I just looked at the little pink fluff ball hugging her unicorn asleep on the floor,” Ms. Moran said. “I was absolutely heartbroken and distraught.”

Ms. Moran quickly reached out for advice from the “HK quarantine support group,” a Facebook community she had found useful on a trip to Hong Kong earlier in the pandemic. Soon she received phone calls from two women she had never met before, telling her not to panic and that they were going to help.

When she called Zara at the hospital on FaceTime the next morning, her daughter was playing with Legos. Ms. Moran asked where she had gotten them.

“She says, ‘Oh, a bag of toys was just dropped in and a happy birthday card,’” Ms. Moran said. “I was going, what? I couldn’t believe it. And all of a sudden I knew she was OK.”

Members of the support group had organized themselves to deliver toys and hot meals to Zara daily.

“Every morning when I rang Zara, her nose was in a bag,” Ms. Moran said. “She just thought it was her birthday every day.”

When the Facebook group began in March, organizers assumed that the pandemic, and thus the group, would last a few months at most. The border was closed to tourists, so the group focused on helping Hong Kong residents with their quarantine once they came home; about 600,000 people arriving from mainland China and overseas have quarantined in the city since the pandemic began, according to the Health Department.

But traveling to Hong Kong grew only more complicated as the pandemic dragged on and the government added layer upon layer of rules. The most recent changes include abruptly extending the hotel quarantine requirement to three weeks, as well as barring entry to all travelers from Brazil, Britain, Ireland and South Africa amid concerns about new variants of the virus.

The group now has almost 30,000 members, with its organizers envisioning it as a refuge of positivity and compassion.

So far, more than 100 quarantine “buddies” have been matched with people who have needed help with things like getting follow-up tests and running errands.

“We were dropping off their saliva samples, we were bringing them groceries, we were walking their dogs,” said Tess Lyons, one of 11 volunteer moderators of the community.

Sometimes what people in quarantine needed most was someone to listen.

“Just because you know something is for the best doesn’t make it easy to endure,” Ms. Lyons said. “We wanted to combine practical help with emotional support.”

Jameson Gong turned to the group last July when his mother, Anna, now 84, was traveling solo to her native Hong Kong from New York, where she spends half the year with family.

“If anyone else is on that flight, please help us take care of her until I pick her up,” he wrote in a post.

Passengers in the Facebook group saw the post and greeted Ms. Gong in English and Cantonese even before they got off the plane.

“I am sitting right in front of her,” one wrote just after landing. “She seems to be doing well.”

“She had no idea why people were coming up to her,” Mr. Gong said.

Ms. Gong’s children had rushed to put her on a plane before new rules came into effect requiring anyone arriving from the United States to quarantine at a hotel rather than at home. But they didn’t tell their mother about the long wait she would have to endure when she arrived, for fear that she would refuse to make the trip.

After Ms. Gong landed, she borrowed someone’s phone to call her son, who explained that she would have to stay at the airport all day for testing.

“Are you kidding me?” she replied.

By then, she was becoming a mini-celebrity among travelers who had arrived that day. Other people waiting for their test results at the airport posted photos and sightings of “Por Por,” a Cantonese word for grandmother, in her bucket hat, red sneakers and red vest. (“She finished reading her newspaper,” “Having a good nap now,” “She is up again,” “I think she is now asking when the heck we will ever get out.”)

As night fell and travelers began to be released, group members clamored online for Mr. Gong to show them the reunion with his mother. He obliged with a short video of himself walking up to Ms. Gong, who was waiting for him in a wheelchair next to her luggage cart.

Group members later got a reunion of their own. Mr. Gong invited some to his comedy club in October, where they met his mother and took a picture together.

Lina Vyas, a public policy professor at the Education University of Hong Kong, who has been following the group since it started, said it had fostered a sense of community sometimes lacking in Hong Kong, a frenetic city of 7.5 million people from all over the world. People who before the pandemic might not have known their closest neighbors are now connecting with strangers over their quarantine experiences.

“Hong Kong has been a place where people have always been running,” Dr. Vyas said. “They have had no time to look at what the community is like.”

The moderators have been surprised to find that many people remain active in the group even after they no longer need assistance, often saying they want to pay it forward.

“People have been so faithful with updating their stories, giving their tips for how to make quarantine more endurable,” Ms. Lyons said.

Ms. Moran said the support her family received from the group reminded her of the human capacity for good.

“The Hong Kong community wrapped their angel wings around my daughter and shielded her from the pain of being separated from her family,” she said. “They turned an absolute nightmare for me into something that was bearable.”