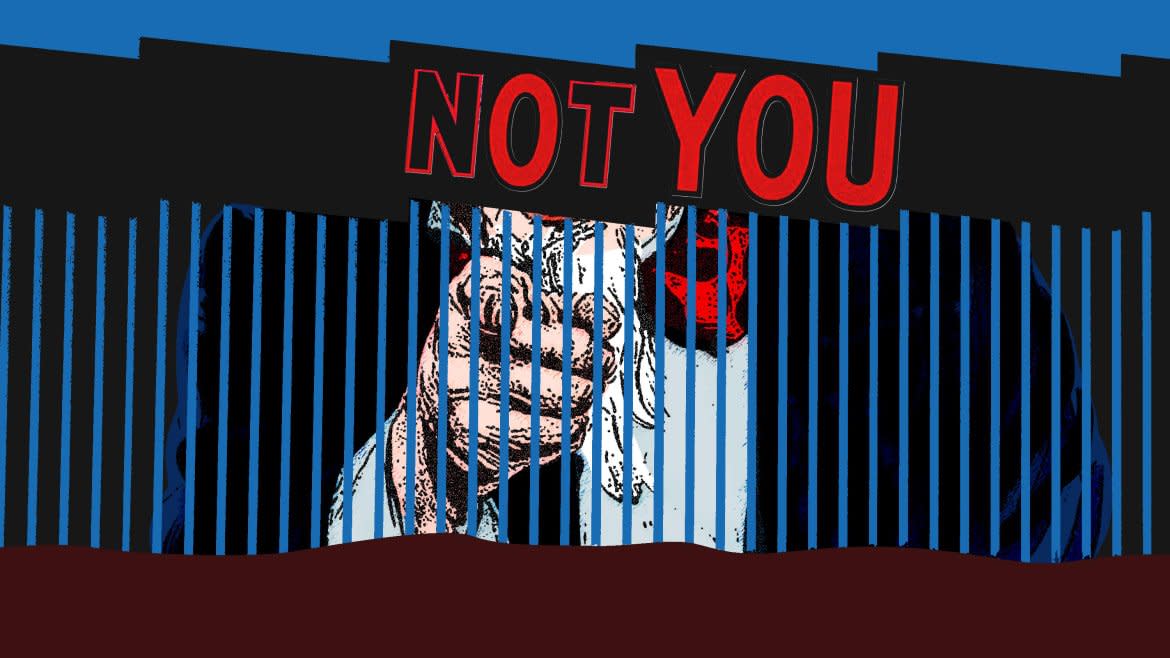 Last June, federal agents confiscated a self-proclaimed U.S. citizen’s paperwork and expelled him to Mexico under a controversial CDC order ostensibly meant to combat the COVID-19 pandemic, The Daily Beast has learned. And despite a series of executive actions rolling back some Trump-era immigration policies, newly inaugurated President Joe Biden has left this order in place, with his administration offering no clear indication it plans to terminate it anytime soon.

Every piece of available evidence points to Óscar Luis Cortes García having been born in May 1991, in Los Angeles, California. When he was still an infant, his mother decided to return to her hometown in Mexico’s state of Colima, Cortes recently explained. He spent the better part of the next two decades in Mexico, but hung on to the notion of someday living in the United States.

When the coronavirus pandemic hit and dried up all the work in his town, he resolved finally to take the leap and make the trip, he said. But he had no notion of U.S. immigration and border law, nor a passport, when he first tried to enter the country.

“I had so little information, what could I do,” Cortes told The Daily Beast. “I don’t have any resources to go to a consulate. They later told me that consulates were free, but I didn’t know that then.”

Figuring that a citizen would be allowed in anywhere along the border, Cortes claimed, he crossed between official ports of entry.

Soon afterward, Cortes was arrested with a group of undocumented migrants. He figured that he might get to present his identity documents when taken to a processing center. Instead, he was fingerprinted and expelled immediately under the CDC Title 42 order, which authorizes U.S. immigration enforcement personnel to immediately turn away people without valid entry documents, even if they had intended to apply for asylum.

The statute it’s based on is not strictly an immigration one, but a public-health measure meant to stop the introduction of communicable diseases to the United States. Still, it provided a convenient way for the Trump administration to advance its anti-asylum agenda: Over 380,000 expulsions have taken place under this authority, according to CBP’s own data.

After Cortes’ first unsuccessful attempt, his aunt Angélica García—a U.S. citizen living in California—convinced him to go through an official port of entry and went down to Mexico to accompany him as he went through. “He’s not very good at speaking, he’s very timid, he doesn’t present well,” she told The Daily Beast. Nonetheless, the two recalled, they figured that his possession of a birth certificate, a Social Security card, and a baptismal certificate would be more than enough.

Instead, Cortes explained, once Customs and Border Protection (CBP) agents realized he had been previously expelled, he was taken to a separate area and aggressively questioned about his documents. “Right away, they said that the papers weren’t mine, that they were going to charge me with identity theft,” Cortes said. “I said, ‘Go ahead, do it, the documents are mine.’”

Even though Cortes was asking to be arrested so his claims could be further evaluated, he was expelled again—but not before agents confiscated all of his documents, he said.

This account was backed up by García, who claimed she was let through but then herself threatened with criminal prosecution when she intervened on his behalf and tried to show the agents pictures of Cortes’ baptism. “[An agent] came out and said, ‘You know, I could charge you with smuggling people into the country illegally.’ I wasn’t scared because I knew I wasn’t doing anything wrong,” she said.

CBP spokesman Matthew Dyman told The Daily Beast the agency’s record of the encounter “counteracts the narrative you are going for.” According to Dyman, Cortes “was unable to provide specific details of the birth certificate that was presented to the CBP Officer, nor answer any of the questions regarding his alleged birth in the U.S.” Dyman also claimed that both Cortes and García were expelled, and questioned why Cortes would believe he could have crossed the border between ports of entry as a U.S. citizen.

While a claim of U.S. citizenship does not automatically enable people to enter the country, federal policies require that immigration agents investigate potentially credible claims of citizenship from those in custody. A 2015 ICE policy on the subject released via a records request notes that an assessment of a credible claim of citizenship must involve a “factual examination and a legal analysis and shall include a check of all available DHS [Department of Homeland Security] data systems and any other reasonable means available to the officer.” While CBP’s policy guidance is not similarly public, it is likely substantially similar; CBP press releases have noted that field personnel are “trained in document analysis.”

Both Cortes and García dispute that any serious effort was made to determine the validity of his claim.

“They didn’t even try, they tossed him out so quickly. It was a matter of—I don’t even know if it was an hour,” García said.

Cortes added that when he was handcuffed, he began to protest. “In English, they were telling me, ‘What’s the matter?’ and I said, ‘Well at least give me back my papers,’ and it was, ‘No, no, we’re getting you out of here.’ They brought me out cuffed, I didn’t even get to speak with my aunt.”

With regards to recovering documentation, CBP spokesman Dyman said he would “suggest researching how to replace U.S. birth certificates if an original is lost.” The State Department referred questions on Cortes’ situation back to DHS, while a Biden White House spokesperson told The Daily Beast the Title 42 order was being reviewed by the new administration.

“We want to be able to restart and resume processing at the border, and we have,” the White House spokesperson added. “However, we are in a pandemic. And so therefore, that combined with the chaos and the things that have been done to our immigration policies over the past four years, we are not at a place where we can just flip a switch and have things sort of be the way they were before.”

450,000 Dead From COVID—and These Fools Are Rolling Back Mask Orders

Since his second expulsion, Cortes has been assisted by the cross-border legal and social services group Al Otro Lado, which is attempting to get him new proof of citizenship. He stayed in Tijuana for about five months in the hope the process would be resolved quickly, but eventually returned to his mother’s hometown.

“I was sick of it, I was feeling very depressed. It’s a very violent city, and I was basically living on the street,” he said.

According to Nicole Ramos, Cortes’ attorney at Al Otro Lado, he hasn’t gone to the consulate because they currently hold little official proof that he is a native-born U.S. citizen. But Cortes and his aunt have copies of some immunization records, baptism, and hospital paperwork, which were reviewed by The Daily Beast (the most important originals were taken by CBP, they claim). An employee of San Antonio de Padua Catholic Church in Los Angeles confirmed this week that the priest listed as baptizing Cortes was working there in 1991. A spokesperson for the LAC-USC Medical Center told The Daily Beast the medical records team corroborated the authenticity of the signature on a letter dated a few days after Cortes’ birth, stating he had been born there. Neither the church nor hospital would attest specifically to Cortes having passed through their facilities.

The initial Title 42 order was ostensibly meant to protect U.S. immigration authorities and border communities from the coronavirus pandemic, but was issued over the objections of career CDC staff, some of whom refused to sign off on it. Leading public health experts have disputed that there is any public health rationale to the policy, and its use was deemed unlawful by the United Nations. A federal judge had stopped the government from expelling unaccompanied minors under the order, but this decision was reversed last week by an all-Trump-appointed panel of the D.C. Circuit Court. (The Biden administration has said it does not plan to expel minors.)

The Washington Post reported this week that the Mexican government had started refusing to accept expelled children and families, but was still taking single adults. Meanwhile, an executive order signed by President Biden on Feb. 2 directed the CDC and Department of Health and Human Services secretary, in consultation with DHS, to “promptly review and determine whether termination, rescission, or modification” of the order was warranted, but left the policy unchanged, with no specific timeline for that evaluation to occur.

“I didn’t know anything about the laws, you know,” he said. “About how they’re supposed to protect you.”

Got a tip? Send it to The Daily Beast here