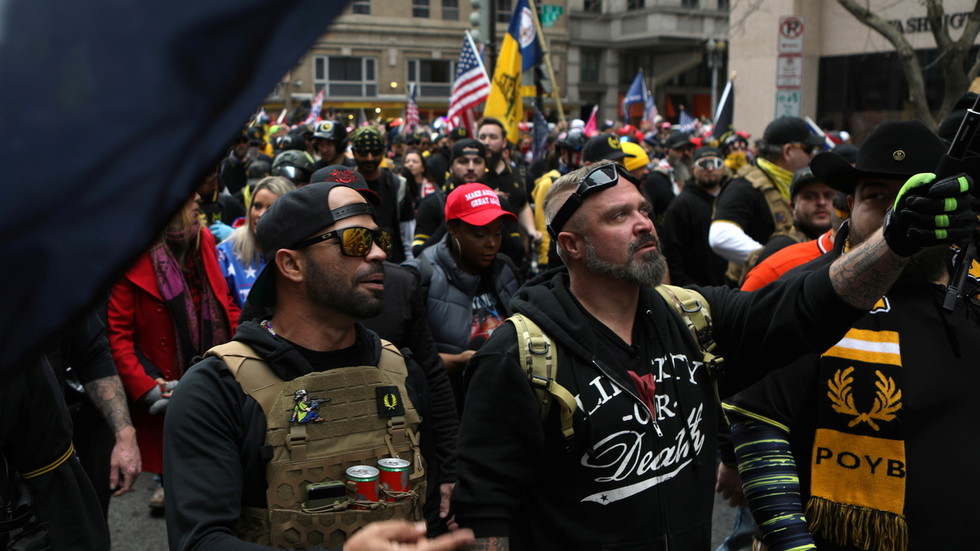 Canada has designated the group ‘Proud Boys’ as a terrorist entity, following a parliamentary resolution blaming the “white supremacist” group of organizing the January 6 riot at the US Capitol.

‘Proud Boys’ were among the thirteen groups designated on Wednesday by Public Safety Minister Bill Blair, under the category of “ideologically motivated violent extremism.”

No matter their ideological motivation, these groups are “all hateful, intolerant… and dangerous,” Blair said.

The Proud Boys were listed alongside Atomwaffen Division, The Base, the “Russian Imperial Movement,” five Islamic State (IS, formerly ISIS) affiliates, three Al-Qaeda affiliates, and Hizb-ul-Mujahideen, an Islamist group operating in Indian-controlled Kashmir.

Blair insisted the designations were not a result of a political process, but one based on “evidence, intelligence and the law.”


The listing will help the Canadian authorities prosecute members of the designated group or anyone helping them, freeze their financial assets, as well as remove “hateful” online postings, Blair said.

The Canadian parliament voted unanimously last week to urge the terrorist designation of the Proud Boys, accusing it of “domestic terrorism” in relation to the January 6 unrest at the US Capitol.

The motion was introduced by NDP Leader Jagmeet Singh, whose party launched a petition as early as January 7, denouncing the Proud Boys as a “right-wing extremist group that promotes white supremacist views.”

Founded by Canadian media personality Gavin McInnes – who has since disavowed the group – the Proud Boys are currently led by Enrique Tarrio, who has repeatedly denied any connection to white supremacy and insisted the organization is neither “fascist” nor a “hate group.”

Tarrio, who identifies as “Afro-Cuban,” has openly denounced white supremacy, anti-Semitism, racism, fascism, “communism and any other -ism that is prejudiced towards people because of their race, religion, culture, tone of skin.”