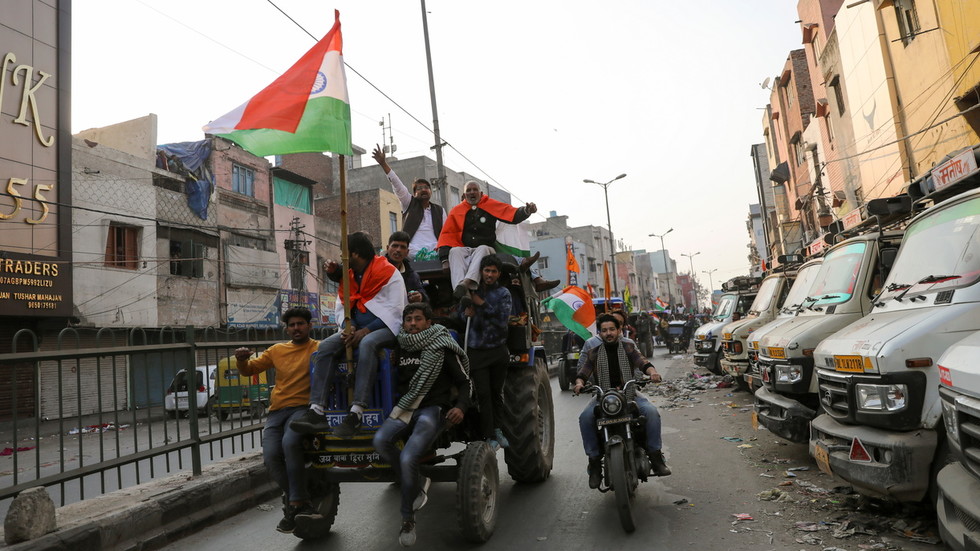 India’s Foreign Ministry has lashed out at “foreign individuals and entities,” accusing them of attempting to tarnish the country’s image with “irresponsible” comments about recent violent protests by Indian farmers.

Indian diplomats slammed foreign supporters of the country’s protesting farmers on Wednesday, accusing them of trying to meddle into the nation’s domestic affairs.

“It is unfortunate to see vested interest groups trying to enforce their agenda on these protests, and derail them,” the Foreign Ministry said in a statement, accusing those groups of trying “to mobilize international support against India.”

Only a “very small section of farmers” have been partaking in the protests, the ministry claimed, urging foreign commenters to abstain from sharing their opinions on the unrest.

The temptation of sensationalist social media hashtags and comments, especially when resorted to by celebrities and others, is neither accurate nor responsible.

Also on rt.com
Irate farmers storm Delhi on tractors as tear gas deployed and internet cut off in scramble to defend Indian capital


“Indian police forces have handled these protests with utmost restraint. It may be noted that hundreds of men and women serving in the police have been physically attacked, and in some cases stabbed and seriously wounded,” the ministry stated.

Peddling anti-Indian sentiment has already resulted in several incidents, with Mahatma Gandhi statues “desecrated in parts of the world.” While the ministry did not specify any incidents in particular, it was apparently referring to the destruction and beheading of a Mahatma Gandhi statue in Davis, California last week.

The ongoing farmer unrest has been triggered by a controversial agriculture reform, which some farmers claim would open up the country for foreign exploitation and deprive them of a minimum wage. India’s government, however, has maintained that the reform would actually increase their production by opening up the market to private investment, while giving producers more options regarding buyers for their goods.


In an attempt to quell the unrest, India’s government has proposed to postpone the introduction of the reform. But angry farmers still demonstrated, demanding that the reform be shelved for good.