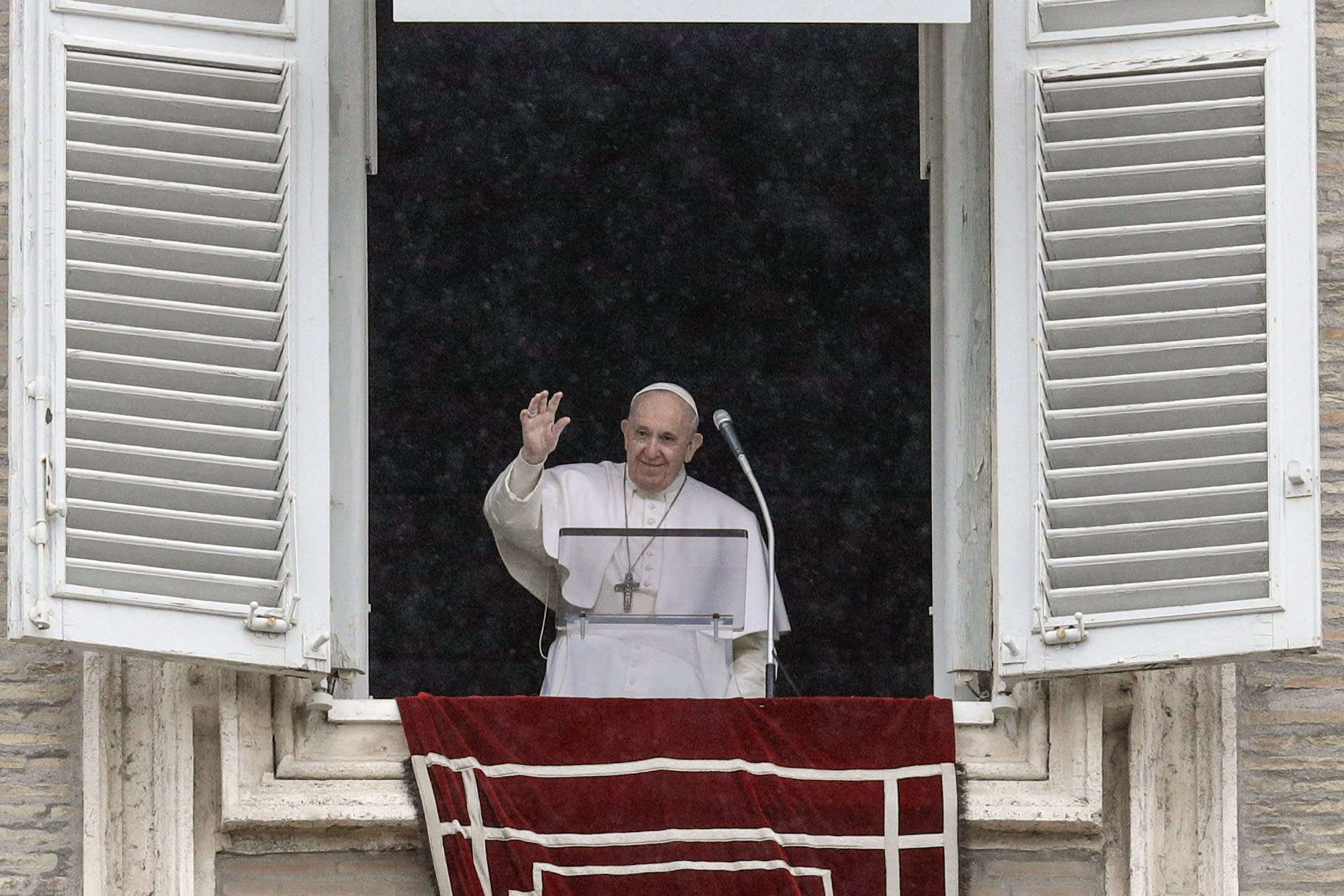 VATICAN CITY — Pope Francis has resumed greeting the public in St. Peter’s Square, seven weeks after he interrupted the Sunday noon ritual to discourage crowds from gathering during the COVID-19 pandemic.

Smiling broadly, Francis appeared at an Apostolic Palace window overlooking the square and greeted a couple of hundred people standing a safe distance apart in the cobblestone square. Most held umbrellas on a drizzly, windy day.

“In the square again!” Francis said. He appeared on the first Sunday since the Rome area regained Italy’s “yellow zone’’ designation, which carries the least restrictions on movement.

Normally thousands of pilgrims, tourists and locals would turn out in the vast square on Sundays to hear the pope. But Italy isn’t allowing travel between regions in the country, and with stringent measures discouraging arrivals from overseas, tourism and pilgrimages have practically evaporated.

— The UK’s aggressive vaccine gambles have paid off, while EU caution is slowing down its vaccination program

HERE’S WHAT ELSE IS HAPPENING:

LONDON — The developers of the Oxford-AstraZeneca vaccine expect to have a modified jab to cope with the South Africa coronavirus variant by autumn, the vaccine’s lead researcher said Sunday.

Health officials in Britain are trying to contain the spread of the variant first identified in South Africa amid concerns that it is more contagious or resistant to existing vaccines. More than 100 cases of the South African variant have been found in the U.K.

Sarah Gilbert, lead researcher for the Oxford team, told the BBC on Sunday that “we have a version with the South African spike sequence in the works.”

“It looks very likely that we can have a new version ready to use in the autumn,” she added.

Her comments came as Oxford University said that early data from a small study suggested that the AstraZeneca vaccine offers only “minimal protection” against mild disease caused by the South Africa variant. The study, which has not yet been peer reviewed, involved 2,000 people, most of whom were young and healthy.

HELSINKI — Norway says it will apply, effective Sunday, stricter coronavirus restrictions in the southwestern coastal municipality of Bergen and twelve surrounding areas to due to a spread of new COVID-19 variants first detected in Britain and South Africa.

Norwegian health officials said the restrictions mean, among other things, that all events outside home are prohibited with a few exceptions including funerals.

Schools are required to switch to remote teaching and universities will close for students. Officials said residents of the 13 areas should work remotely from home as much as possible and most shops will be closed.

The restrictions will apply from 6 pm Sunday for one week.

Some 315 cases of the British and South African variants of COVID-19 have so far been detected in Norway. On Saturday, eight additional cases of the new COVID-19 variants were recorded in the Bergen region

LONDON — A British official says the country is not considering issuing so-called “immunity passports” for those who have been given the coronavirus vaccine but they could ask their doctor for written proof of their vaccine status if they need to travel.

Vaccines Minister Nadhim Zahawi said Sunday that vaccine passports would be discriminatory and officials did not want getting vaccinated to be “made in some way mandatory through a passport.”

Countries including Greece have said they will waive quarantine requirements for those who have had their jabs.

Zahawi said some 1,000 vaccines were given in an hour on Saturday, as the U.K. races to meet its target of giving all over-70s and frontline health care workers their first dose by Feb.15.

The Razi Cov Pars vaccine manufactured by the Razi Vaccine and Serum Research Institute is both injectable and inhalable. Ali Eshaqi, the institute’s manager, said the vaccine will be tested on 13 people within eight days and then if there are no serious reactions, it will be tested on groups of 20 to 120 persons.

Eshaqi said the vaccine has already been tested on animals including mice, rabbits, hamsters and monkeys. The country is also working on a joint vaccine with Cuba.

Iran plans to import 17 million doses of vaccine from the international COVAX program and millions more from other countries.

Iran, with a population of more than 83 million, has struggled with the worst outbreak in the Middle East. Its confirmed virus death toll is 58,469.

JAKARTA, Indonesia — Indonesia’s Food and Drug Authority has announced an emergency use authorization to give the COVID-19 vaccine produced by China’s Sinovac Biotech Ltd. to people over 60.

“The death rate due to COVID-19 shows the statistical data that the elderly people make up a high portion,” the chief of Indonesia Food and Drug Monitoring Agency, Penny Lukito, told a news conference Sunday.

She added that the agency green-lighted the vaccination based on the clinical trials in China and Brazil.

KABUL, Afghanistan — Some 500,000 doses of the Oxford-AstraZeneca COVID-19 vaccine arrived Sunday in Afghanistan from the government in India.

Ghulam Dastagir Nazari, an official from the public health ministry, said the Oxford-AstraZeneca vaccine is from the Serum Institute of India and is the first to arrive in the country.

Afghanistan will store the vaccine until it gets approval from the World Health Organization and then it will give it first to front-line health workers and the elderly, said Majroh.

Afghanistan has recorded 55,300 positive cases and 2,410 deaths. Experts say a lack of testing and missed cases have lead to undercounting the toll of the virus around the world.

JERUSALEM — Israel has started to ease restrictions nearly six weeks after entering its third nationwide lockdown to prevent the spread of the coronavirus.

Some businesses began reopening on Sunday and people are now allowed to move more than a kilometer (half a mile) from their homes. But schools remain shuttered and international flights are severely restricted.

Israel instituted its third national lockdown in late December as new infections spiraled out of control. Israel has recorded over 686,000 cases of COVID-19 since the start of the pandemic last year and 5,074 deaths, according to Health Ministry figures.

At the same time, the country has launched a major vaccination campaign. More than 3.4 million Israelis have received the first shot of the Pfizer vaccine, and at least 2 million have received a second dose.

The Egyptian leader, however, said the response among health care workers has been between 45% and 50%. “There are people who say we do not want” to be vaccinated, he said.

The government has said it reserved 100 million doses of the approved vaccines, according to the state-run Al-Ahram newspaper.

COLOMBO, Sri Lanka — Sri Lankan health authorities say they will begin inoculating the general public against the COVID-19 from next month.

At present, the ministry is conducting a vaccination drive to inoculate more than 260,000 frontline health workers and selected military and police officers.

The vaccination began last week after neighboring India donated 500,000 doses of the Oxford-AstraZenica vaccine, which is the only vaccine approved by the regulatory body in Sri Lanka.

LITTLE ROCK, Ark. — There were 58 fewer people hospitalized in Arkansas on Saturday as the number of hospitalizations continues a recent decline, according to the Arkansas Department of Health.

There were 750 hospitalizations, down from 808 on Friday, while the number of reported cases rose by 1,341 and there were 11 more deaths due to COVID-19, the illness caused by the virus, according to the health department.

Overall, the number of both deaths and cases have declined during the past two weeks, according to data from Johns Hopkins University.

There have been 306,064 total virus cases and 5,061 COVID-19 deaths since the pandemic began in March, according to the state health department.

RIO DE JANEIRO — Normally, Rio de Janeiro’s Sambadrome would be preparing for its greatest time of the year: The world’s most famous Carnival parade.

But a week before the start, the coronavirus pandemic has replaced the pageantry. The celebration is on hold until next year as Rio struggles with a rise in coronavirus cases. The city on Saturday opened a drive-thru immunization station at the Sambadrome, where a line of cars queued up on a broad avenue built for floats.

“This is usually a place of pleasure. Today it is too, because we are exercising an act of citizenship and we are opening the Sambadrome to vaccinate, ” said Paulo Roberto Machado, a 68-year-old nurse who teaches at the Veiga de Almeida University.

Machado has taken part in 40 years of Carnival parades here. But on Saturday, he was coordinating 20 volunteer nursing and medical students to vaccinate people over age 90.

Rio has recorded more than 17,600 confirmed deaths — the most of any city in Brazil, even topping Sao Paulo, which has nearly twice the population.

WASHINGTON — The nation’s top health officials are sounding the alarm about Super Bowl gatherings as a potential coronavirus superspreader event.

They’re urging people to gather with friends over Zoom, not in crowds or at bars and parties. The Tampa Bay Buccaneers and Kansas City Chiefs will play Sunday in a partly filled stadium in Tampa, Florida. The city has acquired 150,000 donated masks that officials will be handing out.

The game is happening during a drop in new coronavirus cases — a sign the infection spike from December holiday gatherings may be easing. However, health officials are concerned Super Bowl parties with people outside their household could spread new cases.

“We’ve seen outbreaks already from football parties,” said Rochelle Walensky, head of the Centers for Disease Control and Prevention. “So, I really do think that we need to watch this and be careful.”

The seven-day rolling average for daily new cases decreased from 180,489 on Jan. 22 to 125,854 on Friday, according to data from Johns Hopkins University.

However, the coronavirus is killing more than 3,000 Americans a day. The nation’s confirmed total death toll is 460,000.

ANCHORAGE, Alaska — More than 100,000 people in Alaska have received the first dose of the coronavirus vaccine as of Friday.

KTUU-TV reported that Dr. Janet Johnston, an epidemiologist with the Anchorage Health Department, says that figure includes over 41,000 people who have been vaccinated in Anchorage, which represents about 15% of the city’s population.

Johnston says that more than 15,000 Anchorage residents have received a second vaccine dose.

While case counts in the municipality have decreased steadily, officials say the number of hospitalizations has increased. Johnston says there were 40 hospitalized coronavirus patients on Tuesday, with only four staffed intensive care unit beds available in Anchorage.