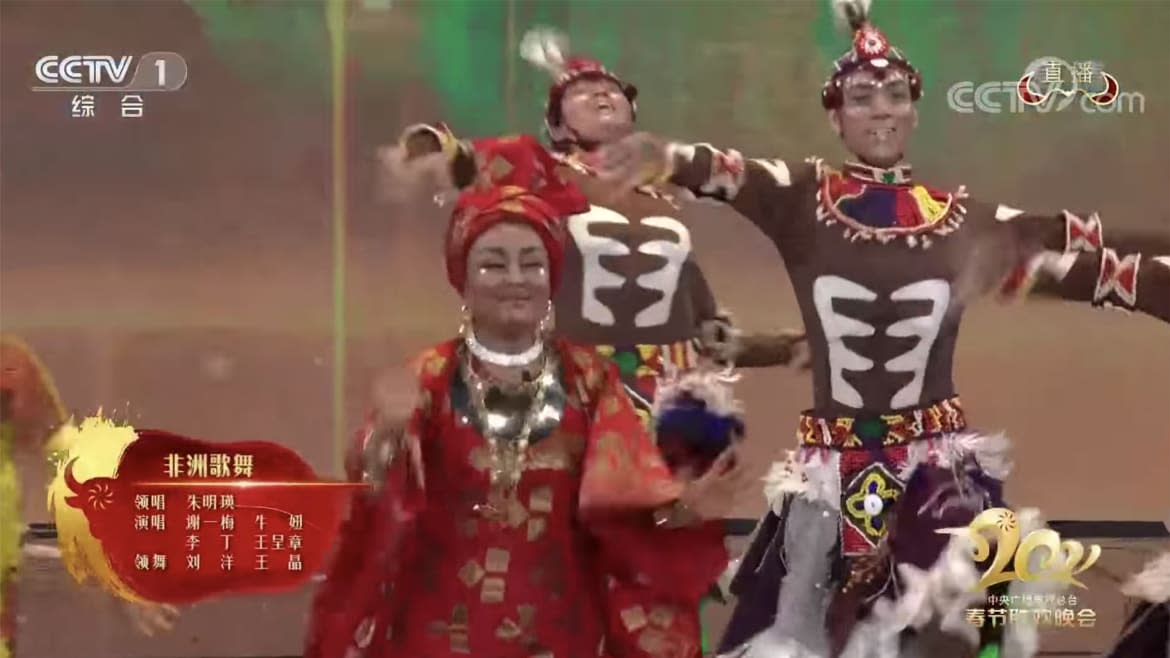 Despite its racist origins and painful history, blackface keeps showing up on TV in China.

The show has a history of controversy, and this isn’t the first time its performers have used blackface on stage. In 2018, for a skit that was meant to deliver a heartwarming message about friendly relations between China and African nations, a Chinese actress donned blackface makeup and strapped on an exaggerated prosthetic derriere to play the role of an African woman. She walked onto the stage carrying a fruit basket on her head and was accompanied by an actor—a Black man—wearing a monkey suit.

And, perhaps unsurprisingly, her character extolled the virtues of China—and thus the Chinese Communist Party.

The Spring Festival Gala is CCTV’s annual variety show, airing on the eve of Chinese New Year. With more than 1 billion viewers at its peak, the roughly four-hour-long program is one of the most-watched television events in the world. Watching the program has become something of a yearly ritual for many people during the week-long Chinese New Year holiday. It covers music, dance, and comedy performances, at times linking up with current events, but with softened subtext that glorifies the Chinese government.

This year’s blackface song and dance routine was choreographed by 70-year-old Zhu Mingying, who has been smearing dark makeup on herself since the 1970s, when she became known for performing “African” and “Latin American” dances.

Zhu has been a member of China’s Oriental Song and Dance Troupe for about a quarter-century. The performance group was formed under the direction of Zhou Enlai, who was a key figure in the CCP’s takeover of China and later served as foreign minister under Mao Zedong. Zhou’s idea was to stage artistic productions referencing the cultures of developing nations for a Chinese audience. But now, nearly six decades later, the troupe’s ethos remains stuck in the 1960s aspic.

China has a largely homogenous population—about 92 percent of the country’s 1.4 billion people are Han, and 56 ethnic minorities form the remaining 8 percent. Race relations and political correctness are viewed through a lens that differs from other places in the world. The idea of a “harmonious society,” as described by CCP propagandists, is to maintain stability through centralized power, and the party’s bureaucrats do little to adapt policies to fit China’s non-Han population. The state’s rules and regulations can even be discriminatory, particularly toward people who do not conform to the CCP’s cultural engineering.

That outlook extends to how major events around the world are conveyed through Chinese media and international platforms with Chinese roots. Last year, when Black Lives Matter demonstrations took place in the United States and beyond, TikTok, which is owned by Beijing-based tech company ByteDance, was accused of censoring videos of the protests. A TikTok spokesperson later said it was due to a “pre-upload issue” that impacted some hashtags, like #GeorgeFloyd, that happened to link up with the movement.

In recent years, relations between China and African nations have been shaped by CCP leader Xi Jinping’s Belt and Road Initiative, which functions as diplomatic outreach via infrastructure development and financing for developing nations. The idea is for China to form tight economic ties on every populated continent, with all roads—literal and metaphorical—leading to Beijing. Critics, including the U.S. State Department, characterize Xi’s Belt and Road as “debt-trap diplomacy.” Now, that extends to vaccine diplomacy too.

But China’s strong economic ties with African nations do not immediately translate to respect for people of other cultures. Broadly speaking, stereotypes remain deeply rooted.

One area in southeastern China’s Guangzhou, where Asia’s largest African community lived and worked, was once called “Chocolate City.” Local news reports have characterized this part of Guangzhou as a den for drug dealers, drug users, and criminals. Police raids are frequent. Sections of the area have been demolished for “beautification” purposes. The once bustling street markets that gave the neighborhood a vibrant character are nowhere to be found. Some Africans who remained in Guangzhou during the pandemic were forced into quarantine even though they had not traveled abroad. Others were evicted by their Chinese landlords and became homeless.

Last May, Zhao Lijian, a Chinese Ministry of Foreign Affairs spokesperson who once suggested that SARS-CoV-2 is a bioweapon released on Chinese soil by the U.S. military, said China has “zero tolerance for discrimination.”

In two tweets, the Black China Caucus, an organization that amplifies the voices of Black individuals whose work relates to China, wrote that “while supporters of the practice allege that blackface centers on empathy & realism. It’s difficult to disassociate it from a long history of minstrelsy & fixation on problematic caricatures,” adding that they hoped the event’s organizers would put an end to the practice and “hire some of thousands of Black people living in many parts of China.”

Indeed, on Chinese social media platforms, there are viewers who defend the use of blackface in the New Year’s gala, arguing that it somehow makes the performance seem more realistic. But for the most part, few cared enough to comment about it. China’s racial tensions are unique, often manifesting in the conflicts between the central government and the different cultures and religions of Tibet and Xinjiang. That means that, for now, blackface will likely stay on air.