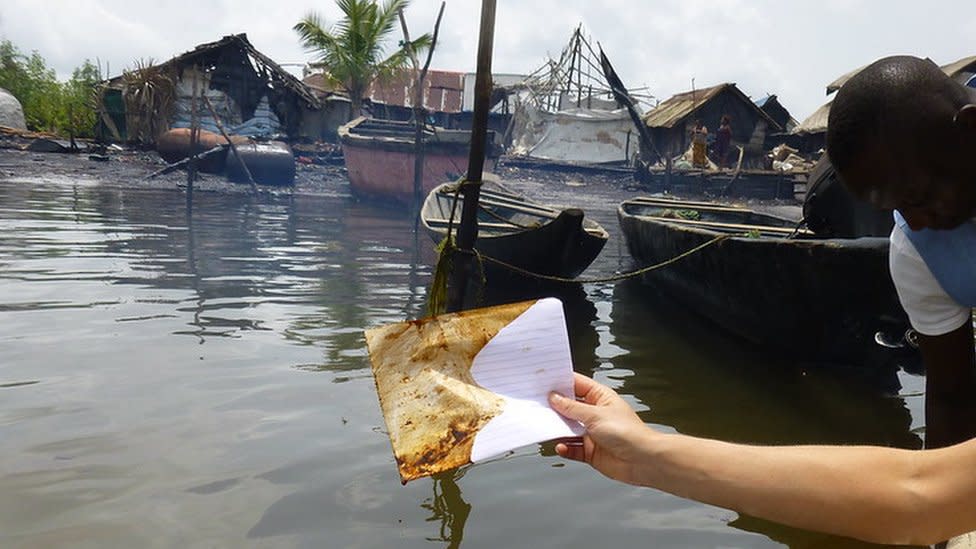 The decision is a victory for the communities after a five-year battle and overturns a Court of Appeal ruling.

The Niger Delta communities of more than 40,000 people say decades of pollution have severely impacted their lives, health and local environment.

Shell had argued it was only a holding company for a firm that should be judged under Nigerian law.

The Supreme Court, the UK’s final appeal court for civil cases, ruled that the cases brought by the Bille community and the Ogale people of Ogoniland against Royal Dutch Shell were arguable and could proceed in the English courts.

Royal Dutch Shell did not dispute that pollution had been caused, but argued it could not be held legally responsible for its Nigerian subsidiary. Shell is responsible for about 50% of the delta’s oil production.

Last year the Court of Appeal agreed with the company, but the Supreme Court said on Friday that that decision was flawed.

The communities, represented by law firm Leigh Day, argued Shell owed a common law duty of care to individuals who had suffered serious harm as a result of the systemic health, safety and environmental failings of one of its overseas subsidiaries.

Leigh Day partner Daniel Leader said the ruling was a “watershed” for “impoverished communities seeking to hold powerful corporate actors to account”. The firm said the amount of compensation sought had yet to be determined.

This is the latest case to test whether multinational companies can be held accountable for the acts of overseas subsidiaries.

Amnesty International welcomed the ruling. Mark Dummett, director of Amnesty International’s Global Issues Programme, said the fight had not yet been won, but added: “This landmark ruling could spell the end of a long chapter of impunity for Shell and for other multinationals who commit human rights abuses overseas.”

Shell said the ruling was “a disappointing decision”.

In a statement it said: “The spills at issue happened in communities that are heavily impacted by oil theft, illegal oil refining, and the sabotage of pipelines.”

It said that, despite the causes of the pollution, its subsidiary had worked hard to both clean up and prevent spills.