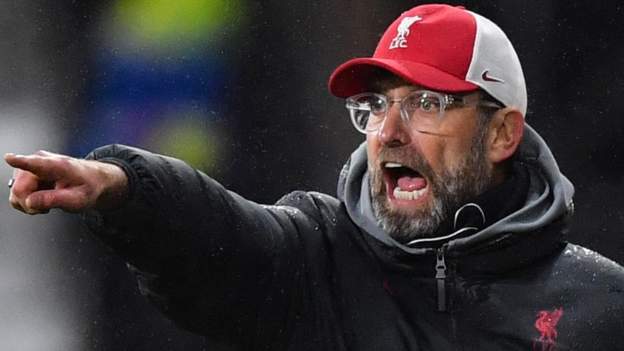 Jurgen Klopp says he does not listen to the “noise” around Liverpool’s slide – but is “concerned” by their form.

The fourth-placed Reds, who have played one game more, trail leaders Manchester City by 10 points.

They have lost their past two games but will move above Leicester if they beat them away on Saturday (12:30 GMT).

“We have 15 games to go, a lot of points. It’s not about where are the others or where they end up. It’s just about us,” said Klopp.

Despite winning the Premier League by 18 points last season, Liverpool’s points-per-game average has dropped more than any other Premier League team since games started being played behind closed doors last June.

The Reds have been hit by serious injuries to players including defenders Virgil van Dijk, Joe Gomez and Joel Matip.

Portugal forward Diogo Jota, who has scored nine goals in 17 games since his £41m move from Wolves last September, has not played since 9 December because of injury.

Klopp added: “We know we are not completely clueless but we know we have to be successful in the future and that’s what we’ll try to be.

“I don’t get the noise around the results to be honest. Whatever you wrote, I didn’t read it. But I know what the situation is and I talk about results.

“Even though I know the reason why we are not flying, I expect us to win more games than we have.

“That’s what I am concerned about.

“We will try our absolute best to make the best season from now on. We will go for it. That’s our job.”