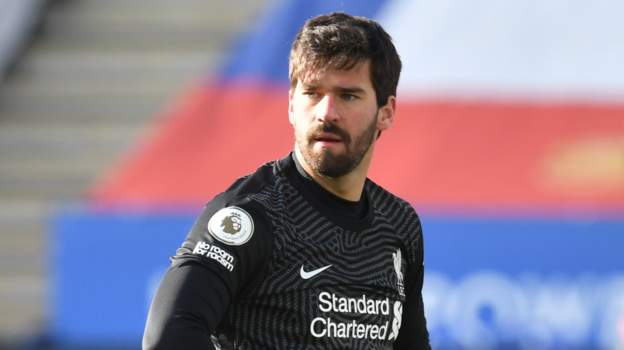 Liverpool looked to be cementing their top-four aspirations when Mohamed Salah put them ahead after 67 minutes with a clever finish after a piece of individual brilliance in the penalty area by Roberto Firmino.

Leicester – who were not at their best even though Jamie Vardy missed two glorious first-half chances – suddenly bounced off the canvas to sink the champions with three goals in a chaotic seven-minute period.

The Foxes saw a 78th-minute penalty award ruled out by the video assistant referee and even though James Maddison’s resulting free-kick found its way into the net past Alisson it was initially ruled out for an offside against Daniel Amartey before being given after a VAR check.

Leicester’s second three minutes later was another horror show for Liverpool keeper Alisson, whose poor clearances contributed to two goals in Manchester City’s win at Anfield last Sunday. This time the Brazilian recklessly dashed out to clear Youri Tielemans’ long ball, only to farcically crash into debutant defender Ozan Kabak, leaving Vardy to run the ball into an empty net.

Liverpool’s unimpressive defence of their Premier League title suffered more embarrassment as they cast aside a position of relative control at Leicester to capitulate at the first sign of a setback.

Jurgen Klopp’s side are unrecognisable from the overpowering combination of talent and concrete-clad self-belief that swept aside all challengers last season to win their first title in 30 years.

The Reds had plenty of possession, without much punch, until Salah put them ahead – and the warning signs had been posted in the first half when Vardy headed straight at Alisson and struck the bar with two chances he would normally have taken.

There was an element of controversy surrounding Maddison’s equaliser for Leicester but it was the lack of response – a total capitulation, in fact – that will be of huge concern to Klopp as his side lost a third successive league game for the first time since November 2014, when Rodgers was in charge.

The visitors’ slumped body language once they had conceded spoke volumes, and their recent decline was summed up by another Alisson error as he came dashing out and crashed into new loan signing Kabak in an incident that had trouble written all over it from the moment the Brazil keeper left his area.

He then redeemed himself with a magnificent save from Vardy but the game had already gone and Barnes was able to confirm Leicester’s win.

Of course, Liverpool will cite their lengthy injury list but the players currently in action must be doing better, with Thiago Alcantara, on as substitute for the injured James Milner, badly off the pace and losing possession on countless occasions.

This is the worst period of Klopp’s reign but Liverpool will have to pick themselves up instantly with a Champions League game against RB Leipzig and a Merseyside derby against Everton at Anfield facing them in the next seven days.

Leicester looked jaded after their midweek FA Cup exertions against Brighton and seemed to be heading for defeat when Salah put Liverpool in front – so it says much for their character that they fought back and cashed in ruthlessly when it counted.

Yes, Liverpool offered them a gift for the second goal but the hosts seemed to sense the champions had been badly hit by Maddison’s leveller and pounced for the three points that put them in second place at the final whistle.

It also meant Rodgers became the first former Liverpool manager to win against them in the Premier League since Roy Hodgson won with West Brom in April 2012.

Vardy proved his importance once more while Barnes, who struggled in the first half, showed his quality and determination in the second to show a touch of class for Leicester’s third.

It was a 4-0 thrashing here by Liverpool that signalled the beginning of the end of the Foxes’ title hopes last season – this victory will bolster their belief that they are very serious top-four contenders after missing out on the Champions League places on the final day of last season.

‘It is not that cool’ – reaction

Liverpool boss Jurgen Klopp speaking to BBC’s Match of the Day: “It was a clear game that we should win.

“We played good football, dominated possession, took the game out of Leicester. Their first goal for me is offside. The difference is we think it’s an objective thing but it’s not. Three players offside, but it was decided to take another moment in the game. That is how it is.

“The second goal is a misunderstanding obviously. It is a situation where we should shout and I didn’t hear anyone shout. It is not that cool.

“The third goal I really don’t like. We are so open. I cannot accept. That was it. The performance for 75 minutes or so was outstanding then we lost 3-1. That shows what a tricky situation we are in.”

Leicester manager Brendan Rodgers speaking to BBC’s Match of the Day: “It was a very good win, the players deserved it.

“We didn’t sink when we went a goal behind, we stayed calm and the players were brilliant in that period – a real collective team performance.

“You can see the improvement in the team’s mindset. Our reaction was superb.”