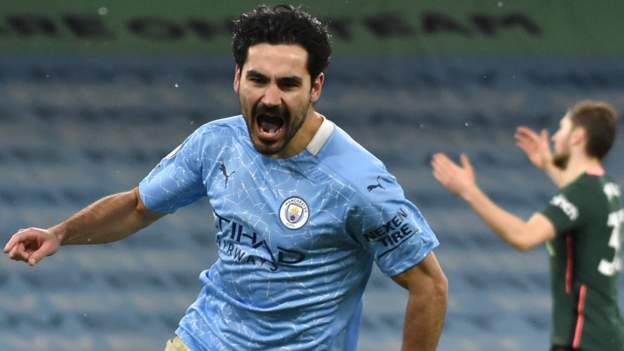 Ilkay Gundogan scored another two goals as Manchester City beat Tottenham to open up a seven-point lead at the top of the Premier League.

Midfielder Gundogan added the second with a shot Spurs goalkeeper Hugo Lloris should have done better with.

The German made it 3-0 following an assist by City keeper Ederson, Gundogan holding off Davinson Sanchez to score his sixth goal in five league games.

Tottenham’s Harry Kane hit the post from a free-kick when the game was goalless but this was a comfortable win for Pep Guardiola’s side.

City have won 11 league games in a row and, with 15 matches to go, have a clear lead at the top.

They also have a game in hand on second-placed Leicester City, as Guardiola eyes a third league title since taking charge in 2016.

Tottenham, who face City in the Carabao Cup final at Wembley on 25 April, have failed to win nine of the past 12 league games.

Rate players out of 10 throughout or after the game. The rater will close 30 minutes after the final whistle.

Rating range key1 = Give it up10 = Pure perfection