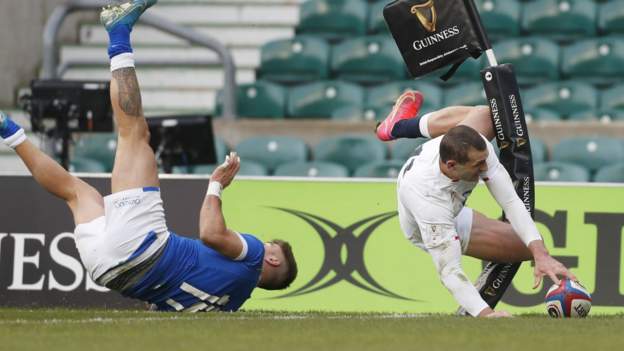 In a former life, Jonny May’s try against Italy in the Six Nations on Saturday would have been the first topic of post-match discussions in pubs all across England.

The first thing to enjoy was the fact that, in the millisecond before he jumped, it looked as though there was no way through.

Then it was all about the leap – surely of Olympic high jump proportions – and the slow-motion replay showing Italy wing Luca Sperandio’s arms closing on thin air.

And then came the touchdown, May showing the athletic prowess of the NFL’s finest as he managed to get the ball on the floor before his legs landed in touch.

It was an acrobatic moment that should be replayed on the big screen when fans are eventually allowed to return to Twickenham.

A moment that makes you forget you are locked down and any post-match chat can only take place virtually.

But that’s all it was – just a moment.

A 41-18 victory against Italy is a respectable enough result but – even though it was the visitors’ Monty Ioane who scored first – the win was not really in doubt.

What fans were looking for was a performance. Something to show last weekend’s unexpected loss to Scotland was an exception, not the new rule.

Once May’s try was covered and there had been some attention paid to Anthony Watson’s excellent contribution, discussion would have to turn to facts as cold and hard as the almost-freezing Twickenham turf.

The work of England’s dazzling wings may have acted as a momentary magician’s misdirection, but it is not enough to distract from some of the less aesthetically pleasing elements of the win.

After the chastening defeat by Scotland, England needed to deliver on the promises they had made at the start of the month about a newly firing attack.

There was undeniably individual brilliance from May, Watson and the fleet-footed Henry Slade, who all looked fired up by a first home loss to the Scots since 1983.

But there were also those left out in the Twickenham cold.

England made 18 handling errors in total – three times as many as their opponents, with captain Owen Farrell and centurion Ben Youngs both contributing.

There were four knock-ons and, though England did manage to bring their penalty count down from the 15 conceded against Scotland, they still gifted Italy 12.

Against the runt of the Six Nations litter, May and Watson provided more than enough for the highlights reel.

And of course, Jones was happy to answer questions on his two stars after the match.

The Australian said May – who has now moved clear into second place on England’s all-time try-scoring list – had “obviously been watching rugby league tapes” as inspiration for his finish.

“It was absolutely brilliant,” Jones continued. “I haven’t seen him do that in training as such but he’s such a good try-scorer. He’s always looking to see how he can score a try.”

On the other wing Watson had side-stepped inside two defenders for his first score and made an impressive intercept for his second.

His efforts were also worthy of plaudits from Jones, who said Watson “looked sharp” and “back to his best”.

But the parts that would not make the editor’s cut are those which must now be examined by Jones and his team with a third-round trip to Cardiff looming in two weeks’ time.

May and Watson took their opportunity when they could, perhaps knowing that they would get less time on the ball against tougher defences if England revert back to a repetitive kicking game.

After Wales’ thrilling victory in Scotland, the defending champions have a chance to reignite their title hopes with a third-round win.

Just as England’s Six Nations and Autumn Nations Cup trophies offered some solace for fans bored of turgid play in 2020, so May and Watson were a welcome distraction from some aspects of the hosts’ game on Saturday.

But – with or without fans – a trip to the Principality is a task incomparable to facing Italy at Twickenham.

By the time England cross the Severn Bridge, May and Watson’s heroics will be forgotten. Victory is all that will matter. 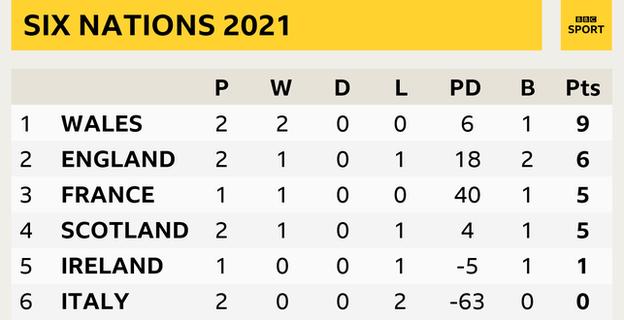