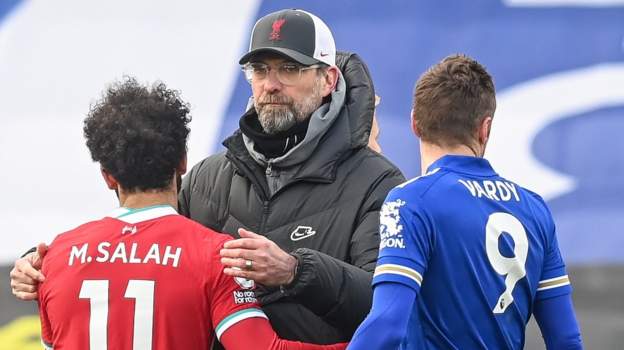 Liverpool’s title defence is over, said manager Jurgen Klopp after his side’s late capitulation at Leicester resulted in their fifth loss in seven games.

The Reds were 1-0 up with 12 minutes of the 90 remaining before a succession of errors saw them lose 3-1.

They are fourth, 13 points behind leaders Manchester City, who have a game in hand.

Klopp said: “I don’t think we can close the gap. We are not worrying about the title, we are not silly.”

His team have 24 fewer points than they had at this stage last season, with injuries, particularly in defence, taking their toll on the team.

The Reds lost key Dutch central defender Virgil van Dijk to a long-term injury in October and have also been without England’s Joe Gomez, while the club announced earlier in February that Cameroonian Joel Matip would miss the rest of the campaign with an ankle ligament problem.

This prompted a recruitment drive during the January transfer window, with two defenders brought in.

One of those was Turkish player Ozan Kabak, on loan from Schalke, who made his debut against the Foxes on Saturday and was one half of the club’s 17th centre-back partnership this season. He was involved in a mix-up with goalkeeper Alisson that led to the home side’s second goal in the 81st minute.

James Maddison had equalised for Leicester three minutes earlier before Harvey Barnes added a third five minutes from time. That was the seventh goal Liverpool had conceded in their past two Premier League games – as many as they had conceded in their previous 10. The Reds have now conceded 32 goals in 24 league games this season, just one fewer than they did in the whole of 2019-20.

“We have to win football games and big parts of the football were really good,” said Klopp, whose side lost a third consecutive league game for the first time since November 2014.

“We scored a great goal but conceded a strange one and I think it’s offside, and the [goal for] 2-1 is a misunderstanding. That had too big an impact on the game. We had to show a different reaction, and the third we gave away too easily.”

“We have to avoid mistakes and misunderstandings. Today we didn’t do that. The rest of the game was really good. First we have to perform again – results are massively related to the performance.”

‘The wheels have come off’ – pundits react to Liverpool’s slump

Former Arsenal defender Martin Keown on BBC’s Final Score: “That central defensive position is where the problems lie. Alisson is obviously massively at fault, but he is having to help out with a defence he doesn’t trust any more.

“Klopp has lost defenders and taken two midfielders out into the defence. That is four changes from the team who did so well and he doesn’t need to do that. It is too many.

“Without Gomez and Van Dijk they have one hand tied behind their backs. The wheels have come off. Klopp needs to get that position sorted.”

Former England international Karen Carney: “It is the defence – they are not comfortable. Midfielder Jordan Henderson on the left, a new centre-back, and goalkeeper Alisson completely unnerved. Because they were nervy at the back that is why they fall apart.

“Who would have thought Liverpool would be fighting for the top four?”

Former Tottenham midfielder Jermaine Jenas on BBC MOTD: “There has been a lot of talk about their midfield. They haven’t got the legs in there and when you have a weak link or something missing, it breaks down and Thiago was a really weak component without the ball. It seems clear to me he is doing things he shouldn’t.”

Will Match of the Day presenter Gary Lineker once again present the programme in his underwear if Leicester win their second title in five years?

‘Liverpool have not been good enough’

The idea that Liverpool would have a fight on their hands to finish in the top four after romping to the Premier League title last season would have been treated as a laughing matter at the start of the season.

And yet this, after another calamitous late collapse, is where they now find themselves. The Reds are in a genuine dogfight to achieve what would have been a very minimum aim.

Liverpool, bluntly, have not been good enough and the manner in which they shrunk after Leicester’s contested equaliser would have been an alarming sight to those used to seeing them bully teams into submission with talent and intensity in recent years.

They possess enough quality to bounce back, not for the title because that has gone, but the top four – but they need to do it quickly otherwise the hole they are currently in will get deeper.