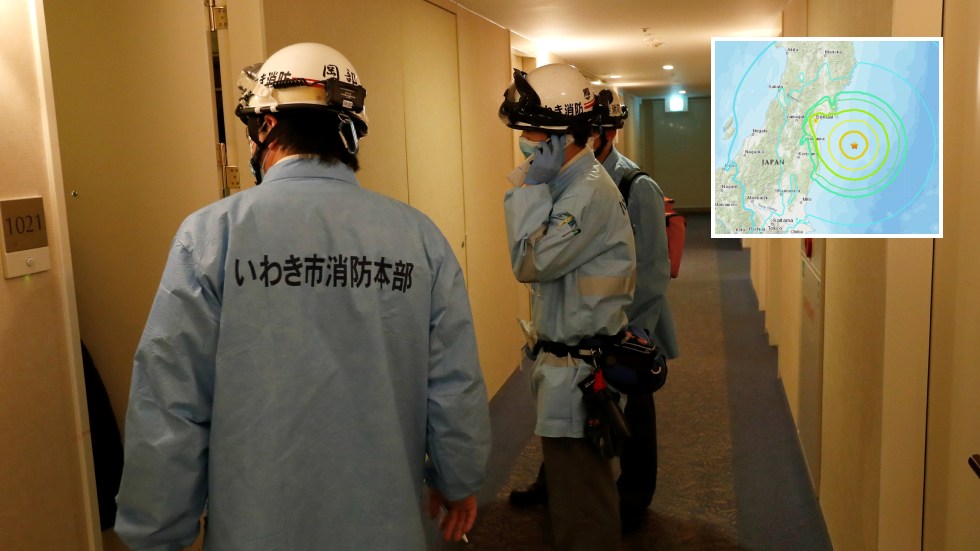 A 7-magnitude earthquake struck off the coast of Japan’s Fukushima prefecture on Saturday, violently shaking cities on the eastern seaboard and prompting fears of a tsunami, weeks before the 2011 nuclear disaster’s anniversary.

Several seismological agencies have put the magnitude of the quake, which hit east of Japan’s largest island of Honshu, at 7.0 or higher.

It was also registered as the highest possible on the Japan Meteorological Agency Seismic Intensity Scale. A 7 quake in Japan indicates a violent, heavy earthquake that can shake people and objects around, destroy buildings, and crack the ground.

#BREAKING: A large earthquake has occurred off the coast of Fukushima, Japan. Early indications are that this was a 7.1 magnitude earthquake. More information coming in from the Japan Meteorological Agency show that this was an intense quake… Shake map below.. #Earthquakepic.twitter.com/8qxIkdGUnH

Powerful quake at 2308 Saturday evening in Japan. Intensity of 6+ (on scale to 7) in Fukushima and Miyagi. M7.1 in same area as major quake 10 years ago, but while powerful was smaller this time. No tsunami risk this time. pic.twitter.com/IYMDGTrF3P

The earthquake prompted fears of a potential tsunami, but the threat was soon called off.

THERE MAY BE SOME CHANGES IN THE TIDE LEVEL DUE TO THE PREVIOUS EARTHQUAKE, BUT THERE IS NO CONCERN ABOUT TSUNAMI DAMAGE

At least 20 people were reportedly injured in the Miyagi and Fukushima prefectures, while around 950,000 homes lost electricity. No buildings in Fukushima reportedly sustained major damage. For context, nearly 16,000 deaths and more than 6,000 injuries were recorded, following the 2011 earthquake and tsunami, with a further 2,500 people being reported missing.

English speakers in Japan took to social media to express their shock at the earthquake, which some described as far more violent than any they had previously experienced.

“In more than 7 years in Japan, that was the strongest, longest and scariest quake I’ve ever felt,” one user wrote, while a Japanese Twitch streamer claimed the earthquake made her jump out of bed.

The earthquake led to power outages in the affected regions, and videos showed intense shaking inside homes, with furniture rattling and possessions flying off surfaces. A 4.9-magnitude aftershock was recorded half an hour after the quake initially hit.

It also sparked fears of a repeat of the 2011 Fukushima Daiichi nuclear disaster, when a severe earthquake generated a tsunami and the worst nuclear incident since Chernobyl in 1986. March 11 marks the 10th anniversary of the Fukushima disaster.

No issues were reportedly found at the Fukushima nuclear power plant after Saturday’s quake, the Kyodo news agency said.

I was so scared earlier bec of the quake Mag7 in Fukushima! No, not 3/11 again Lord please. please protect us! I am still trembling, ???I was ready to go out of my apartment, but I couldn’t think of what to do. I was at loss! @SB19Officialpic.twitter.com/9gOsTIbCAU

Haven’t felt this big of a quake in a while, even though the strongest quake was felt in Fukushima and not here in Tokyo. It’s almost the 10yr anniversary of 3.11 quake. https://t.co/0YzvoLuXyT

University of Tokyo Earthquake Research Institute Professor Kenji Satake claimed the Saturday earthquake was an aftershock of the earthquake in 2011.

“Because [the 2011 quake] was an enormous one, with a magnitude of 9.0, it’s not surprising to have an aftershock of this scale 10 years later,” he commented, explaining that there was no tsunami this time because of the earthquake’s comparatively deep epicenter.