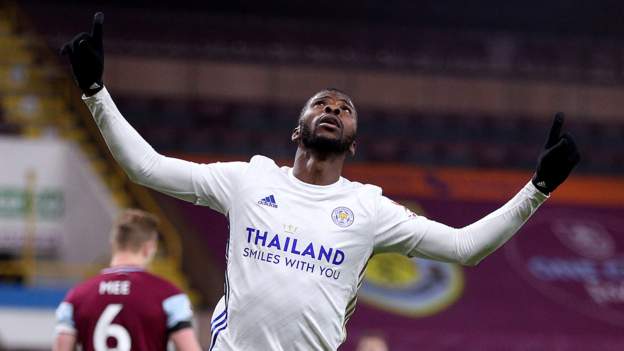 Kelechi Iheanacho stepped up superbly in the absence of a number of injured team-mates to earn Champions League-chasing Leicester a potentially important draw at Burnley.

With Harvey Barnes having joined James Maddison on the Foxes’ injury list and Jamie Vardy having only just returned from his own lay-off, Iheanacho gave his side the attacking edge they required courtesy of a volleyed equaliser midway through the first half.

City had earlier gifted the home side the lead, with Hamza Choudhury’s under-hit pass near his own box allowing Matej Vydra to nip in, beat a man and then fire a shot into the roof of the net.

There were chances to win the game for both sides, but goalkeepers Nick Pope and Kasper Schmeichel each produced a typically excellent display.

Both teams also hit the post in the second half – Ashley Westwood for Burnley with a volleyed effort from a tight angle and Youri Tielemens for Leicester with a shot from the edge of the box.

It is a useful point for Burnley, who extend the gap between themselves and 18th-placed Fulham to six points.

For Leicester, the comeback and resulting confidence it may inspire is as important as the reward it yields. and they now have a six-point advantage of their own over fifth-placed Chelsea.

Iheanacho provides hope in the gloom

Having earned a reputation as a predatory finisher during a series of cameo appearances for Manchester City in the early stages of his career, Iheanacho has never fully justified a regular starting spot at Leicester since joining the club for £25m in 2017.

Now would be a fine time to start fully living up to his considerable promise, with the Foxes deprived of top-drawer attacking talent and desperate not to allow Champions League football to elude them again.

Maddison and Barnes have either scored or assisted 15 of Leicester’s past 20 Premier League goals.

But in allowing Ndidi’s lofted pass to float over his shoulder before volleying the ball past Pope, Iheanacho demonstrated he has the skills to take over from the England pair.

His goal on Wednesday was not only brilliant but timely, with the early concession rocking a Foxes side that came into the fixture off the back of two defeats and had a number of square pegs in round holes.

While understandably not at their best, they visibly lifted after the goal, though, and stepped up again when defender Wesley Fofana came on and Wilfred Ndidi was restored to his preferred spot in the middle of midfield.

Before that, Choudhury had a chance to make amends for his error but fired over with just Pope to beat from a central position. After the equaliser, Tielemens saw one shot hit the woodwork and another saved by Pope, who also denied Marc Albrighton from long range.

A point is not ideal, but it is a necessary check on a potentially demoralising run of results in dire circumstances.

The same could be said of Burnley.

A win would have provided that extra bit of breathing space at the bottom, but they should take heart from a better result and much-improved performance from Sunday’s 4-0 surrender at Tottenham.

Ben Mee almost gave them an early lead with a header that went over the bar before Vydra did put them in front.

Tarkowski and Wood were both unfortunate not to restore the Clarets’ advantage with headed efforts, as was Westwood when he drove against the woodwork.

Wood in particular made Sean Dyche’s side a far more potent attacking weapon with his hold-up play, neat link-ups and ability to find space to test Schmeichel.

There were certainly more positives than negatives for Dyche, who is likely to welcome some more absentees back soon and clearly has enough in his squad to avoid getting dragged back into the bottom three.