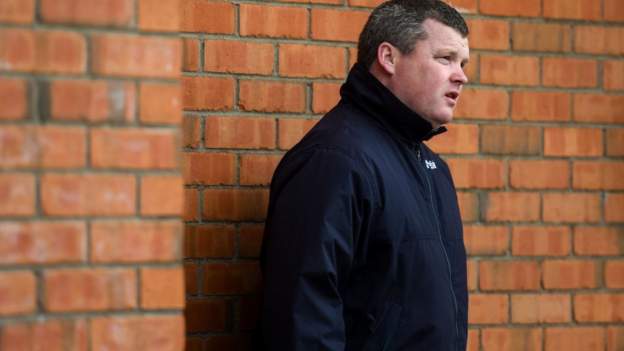 After the storm, comes the fallout.

Racing has endured a barrage of unwanted headlines after a photograph was posted on social media of leading trainer Gordon Elliott sat on a dead racehorse.

The image was labelled appalling and abhorrent, with the damage compounded by a similarly distasteful video of jockey Rob James at another yard.

On Friday, the 43-year-old Irishman Elliott was banned for a year, six months of which were suspended.

There remain unanswered questions, issues for the sport to tackle and a renewed spotlight on equine welfare with the Cheltenham Festival and Grand National meetings approaching…

Who is Gordon Elliott?

An accomplished amateur jockey who did not hail from a racing background, he then became the youngest trainer to win the Grand National, at 29, when Silver Birch triumphed in 2007.

From purpose-built stables he owns in County Meath, Elliott challenged the dominance of Willie Mullins, won the Cheltenham Gold Cup with Don Cossack in 2016 and was the meeting’s most successful trainer two years running.

If any horse is indicative of his ability, it is Tiger Roll, a diminutive hurdler turned two-time National winner who is being aimed at a fifth Cheltenham Festival victory next month.

“It absolutely breaks my heart to read and hear people say that I have no respect for my horses. That couldn’t be further from the truth,” he told the Racing Post on Monday.

Elliott said that he took a phone call and sat down on the dead horse “without thinking” but his first statement and a subsequent tweet celebrating four winners at Punchestown led to further criticism.

What next for him?

The punishment means horses cannot run under his name until August, but they are likely to compete for another trainer from the same Cullentra stables where around 80 staff are based.

He does not intend to appeal against the penalty, which rules him out of several major meetings including Cheltenham, Aintree and Punchestown.

Elliott’s empire, built from scratch over 15 years, has been seriously damaged by the controversy.

His unbeaten rising star Envoi Allen was one of eight horses moved to other trainers by owners Cheveley Park Stud, and two sponsors have withdrawn.

Major backer Michael O’Leary, the Ryanair boss who runs Gigginstown House Stud with his brother Eddie, has pledged support although they are gradually withdrawing from the sport anyway.

“I am paying a very heavy price for my error but I have no complaints,” said Elliott.

“It breaks my heart to see the hurt I have caused to my colleagues, family, friends and supporters. I have a long road ahead of me but I will serve my time and then build back better.”

The British Horseracing Authority said it was “appalled” by the photograph and that Elliott’s behaviour “deeply undermined” the industry’s welfare values.

In the photo Elliott sits astride the Gigginstown-owned racehorse Morgan, who had suffered a heart attack on the gallops. A caption says ‘new work rider’.

Posted on social media nearly two years after it was taken, it appears a deliberate act to damage Elliott – a “concerted attack” according to the Irish Horseracing Regulatory Board panel.

Its judgement says the photo suggests that he “callously participated in posing for a photograph which, given all the circumstances, was entirely inappropriate”.

What it does not address is several unanswered questions.

Who took the photo? Who was it sent to? Who is the person standing slightly out of shot? Who was Elliott speaking to on the phone? And are any of those people still working within racing?

What angered so many in racing is they felt the photo and video undid their hard work in telling people that racehorses are well-loved animals.

Those outside the sport wonder about its ‘culture’ and what really goes on behind the scenes.

A hashtag #fortheloveofthehorses was shared by trainers, owners and jockeys showing countless examples of horses being well cared for, but may have been largely preaching to the converted.

“I was always taught that the duty of care to the animal is as much when it is dead as it is when it is alive,” he said.

The image has reignited debate over the sport itself. Does racing need to engage more with its critics – those who call it cruel?

Debates on racing channels regularly visit the topic of welfare, but the discussions are almost always confined to those on the inside.

Scottish trainer Lucinda Russell, winner of the Grand National in 2017 with One For Arthur, was so shocked by the photo that she even apologised to the horses in her care.

“Well I think it’s wrong to have that image about racing, I mean it’s not like that – we adore our horses,” she said.

What now for racing?

This has been a dark few days for racing – which in the UK is the second biggest spectator sport behind football and a £3.5bn industry.

There are around 14,000 racehorses across 550 licensed training yards and another 3,500 people employed within the breeding sector.

Figures for last year from the BHA show there were 86 fatal injuries in jump races from 25,188 runners at a rate of 0.34%

“It breaks your heart and there have been times where I’ve lost horses in my career and it really makes you question whether this is the game for you after all,” said former jockey Lizzie Kelly.

It is now more than two years since the BHA’s previous chief excecutive Nick Rust boldly announced plans for a data-driven jump racing risk model and a review of penalties for breaching rules on whip use by jockeys.

They remain works in progress.

What will happen with Cheltenham and Aintree?

Anticipation is building for the forthcoming Cheltenham Festival, although enthusiasm this year has been tempered by the controversy.

There will be mixed emotions if any of the horses previously trained by Elliott go on to win, with licensed trainer Denise ‘Sneezy’ Foster tipped to step in while he is suspended.

The Grand National at Aintree is on 10 April, an event which attracts millions of television viewers and all concerned will be hoping for the safest possible outcome.

A week ago, Elliott could have dreamed of having a fourth victory in the famous race this year. That was before a stormy seven days that will not easily be forgotten.