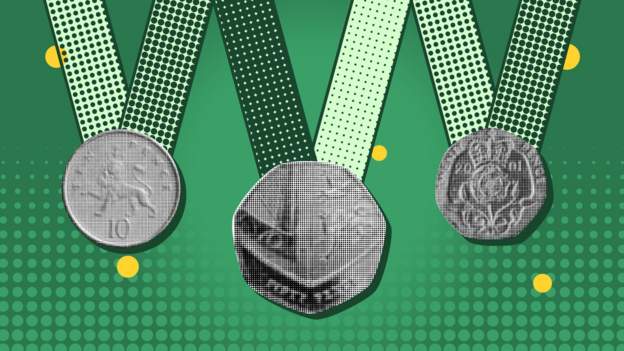 The overwhelming majority of sports now offer equal winning prize money to men and women at the top level, a BBC Sport study has found.

Of the 48 sports surveyed, 37 offered prize money – of which only three did not offer parity at any of its major championships or events.

The biggest gaps in prize money for male and female athletes are in football, golf and basketball.

“It’s absolutely right that the rewards match that success and we have seen a significant levelling up in the prize money on offer in recent years.

“We must continue to push for greater participation, employment, commercial opportunities and visibility in the media for women’s sport, to keep up this momentum.”

Since the last edition of the BBC prize money in sport study in 2017, sports including hockey, cliff diving, surfing and wrestling have achieved parity at at least one major competition.

However, cricket has taken the biggest strides to narrow the gap.

The 2020 Women’s T20 World Cup saw champions Australia awarded a purse of $1m (£716,635). That is reportedly equal to what the winners of the men’s tournament will win in 2021, but the International Cricket Council (ICC) has not yet confirmed the tournament’s prize pot.

“We’ve made a very strong statement that we wanted to have that equal prize money because it really demonstrates how much we really value women’s cricket and the women’s game moving forwards,” Beth Barrett-Wild, head of The Hundred women’s competition, told BBC Sport.

“That real tangible action hopefully will drive others to come with us.

“If you want to authentically say that you value men’s and women’s sport exactly the same, then you need to award equal prize money.”

What is the BBC prize money in sport study?

The 2021 study focuses on the prize money awarded to competition winners and does not include wages, bonuses or sponsorship.

Some sports, including rugby union and rowing, do not offer prize money to men or women in major competitions.

Men and women compete alongside each other in horse racing and equestrian events.

What has changed since the 2017 study?

Wrestling’s Ranking Series made prize money equal in 2018, while the World Surf League achieved parity in 2019.

Cliff diving’s World Series will offer equal prize money of 7,085 euros (£6,126) to its male and female athletes from 2021, something British bronze medallist Jess Macaulay said was “a relief”.

“Hearing them say that we would get equal pay for our next competitions was a relief because this is our career. We are all putting the same amount of time and effort into trying to be the best in the field,” she told BBC Sport.

“If we want to be at the top of our game we want to be as valued as the men in the sport, so it is just really exciting. It felt like a really big step for our sport.”

This year’s Rugby League World Cup has yet to confirm its prize money, but it will award prize money to the winning women’s and wheelchair teams for the first time, and all teams will get equal participation fees.

Where is the gap still biggest?

The difference in the prize money handed out in men’s and women’s football remains stark.

The 2019 Women’s World Cup was the most watched edition of the tournament in history but, despite its projected overall total audience reach of 1.12bn people being a third of the 2018 men’s World Cup, its prize fund was more than nine times less.

Fifa told BBC Sport it had a “long-term vision for the development of women’s football at all levels around the world and is investing to this end”.

Uefa told the BBC that prize money for earlier rounds in the competition has increased, so the winner receives more than in previous seasons.

“While we recognise there is currently a significant disparity between prize money for men’s and women’s competitions, these are determined by the amounts of money generated through commercial revenue, including national and international broadcast rights,” an FA spokesperson told BBC Sport.

“The [men’s] FA Cup is the biggest revenue producer for the FA. This revenue enables us to invest back into football at all levels and we have made significant progress to develop the women’s game as a result.”

Disparities also remain in golf. Female golfers are among the highest earners in elite sport but still earn considerably less than their male counterparts at majors.

While figures for the 2021 tournaments have not yet been released, a spokeswoman for the R&A, which organises The Open and Women’s British Open, said its “stated aim” is to close the prize money differential.

She said: “We have been able to make substantial progress in that regard and are working hard to build the commercial effectiveness of the championship to increase revenues and support further investment in future.

“We fully recognise that we have much more to do but we can’t do it alone. We all have to play our part in growing the commercial success of women’s golf at the highest level and that means everyone from golf bodies to sponsors and the media.”

“The US Women’s Open is the leader in purse in all of women’s golf, which requires disproportional investments into the championship compared to revenue generated,” he said.

“We will continue to make investments that ensure the US Women’s Open remains the premier event in women’s golf through its purse, broadcast, host sites and player experience, as we drive toward the ultimate goal of purse parity.”

However, a sign that golf is slowly changing is the the new ISPS Handa World Invitational event. Co-sanctioned by the men’s and women’s European Tours and LPGA, it will feature separate men’s and women’s tournaments in July, each with equal fields competing for equal prize money.

How will Covid-19 affect prize money?

The coronavirus pandemic has had, and will continue to have, an impact on sport at all levels. While the majority of sports surveyed by the BBC said prize money would not be affected, many said they did not know at this stage.

The FA is currently planning for “potential losses” of about £300m and, as a result, has reduced competition prize money.

However, the top prize for the women’s FA Cup winners will remain the same.

Kelly Simmons, the FA’s director of the women’s professional game, said: “It’s well documented that the FA has had to undergo significant cuts and redundancies. It’s a very tough environment. It’s not the time at the moment to be trying to find new monies.

“Down the line we want to develop and grow the women’s FA Cup just like we’ve been doing with the Women’s Super League by helping to develop it commercially to bring in revenue and ultimately get as much money out to the clubs as we can.

“Of course we want to increase the prize fund, but those funds aren’t there so we invest in other ways in clubs.”

This year’s Australian Open tennis tournament reduced the payout to winners by 33% compared to 2020, although the overall prize pot increased. This was done to increase the money won by lower-ranked players who exited in earlier rounds, and whose income had been affected by the pandemic.