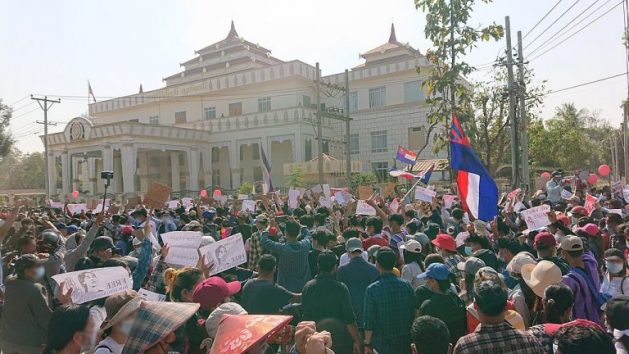 UNITED NATIONS, Mar 22 (IPS) – Two human rights groups have called on the military in Myanmar to release journalists arbitrarily jailed and allow them to work without harassment and prosecution.

Amnesty International and the Committee to Protect Journalists (CPJ) told IPS that they will double down on those demands until all journalists are released and the operating licenses of newsgroups are restored.

“From revoking media licenses and raiding newsrooms to arbitrarily arresting and prosecuting media workers covering the current human rights crisis in the country, the Myanmar military is desperately trying to hide from the world the appalling crimes it is committing against its own people every day,” Emerlynne Gil, Deputy Regional Director at Amnesty International, told IPS.

The calls follow a briefing by the spokesperson for the United Nations High Commissioner on Human Rights Ravina Shamdasani who said that ‘deeply distressing reports of torture in custody’ were adding to the crisis unfolding in the country.

Protestors have taken to the streets of Myanmar since a Feb. 1 coup by the military. Journalists covering the anti-junta protests have been particularly at risk of being detained, after the military amended Section 505(a) of the country’s penal code to include offences that include knowingly spreading ‘fake news’. The amendments give the military increased latitude to arrest journalists.

“The death toll has soared over the past week in Myanmar, where security forces have been using lethal force increasingly aggressively against peaceful protesters, and continue to arbitrarily arrest and detain people throughout the country,” Shamdasani said last week.

Shamdasani told the press that hundreds of illegally detained people are unaccounted for and ‘this amounts to enforced disappearances’.

Representatives of press rights group CPJ told IPS that journalists in Myanmar are living in fear.

“They are scared that the crackdown will become more targeted against media and that the junta intends to establish a new censorship regime, similar to the harsh measures imposed on the media by previous military governments,” CPJ’s Southeast Asia Representative Shawn Crispin told IPS, adding that “at least 5 independent news organisations have already had their operating licenses revoked for arbitrary and vague reasons. Other groups fear they could be next.”

Reports of press censorship by authorities in Myanmar are not new. In 2018, the UN High Commissioner for Human Rights assessed press freedom and high-profile journalist prosecutions through 5 individual cases. The ensuing report, entitled ‘The Invisible Boundary – Criminal prosecutions of journalism in Myanmar,” cited harrowing experiences by the targeted journalists and stated that the unlawful arrests and prosecutions created ‘an invisible boundary for media personnel, that they cross at their peril.” It concluded that freedom of expression and press freedom were under attack.

Earlier this month, the UN Security Council said it was deeply concerned about developments in Myanmar. According to the UN, at least 37 journalists have been arrested in Myanmar since Feb. 1, with 19 still unlawfully detained.

“The Security Council strongly condemns the violence against peaceful protestors, including against women, youth and children. It expresses deep concern at restrictions on medical personnel, civil society, labor union members, journalists and media workers, and calls for the immediate release of all those detained arbitrarily,” a statement from the President said.

Amnesty International says a free press in Myanmar is more important than ever.

“It is all the more urgent now to ensure access to information in Myanmar amid escalating violent repression of peaceful protesters and severe internet restrictions, and all attempts to hamper the right to seek, receive and impart information must cease immediately,” Gil told IPS.

6 journalists have been charged under Article 505(a) of Myanmar’s penal code.

“We are also calling on the regime to refrain from imposing any new laws or measures that would restrict media freedoms,’ Shawn Crispin told IPS.

A Human Rights Council Resolution of Mar. 12  consists of 9 recommendations of the Government of Myanmar, meant to protect journalists, freedom of expression and freedom of the press.

Among other measures, the Council wants the authorities to decriminalise defamation and amend the country’s media law to ensure that the Myanmar Press Council can mediate in disputes with media outlets and journalists.

The Council also wants the immediate and unconditional release of all journalists in detention, an end to all current cases against journalists for exercising their right to freedom of expression and ensure access to restitution for the journalists who have been arrested and persecuted.