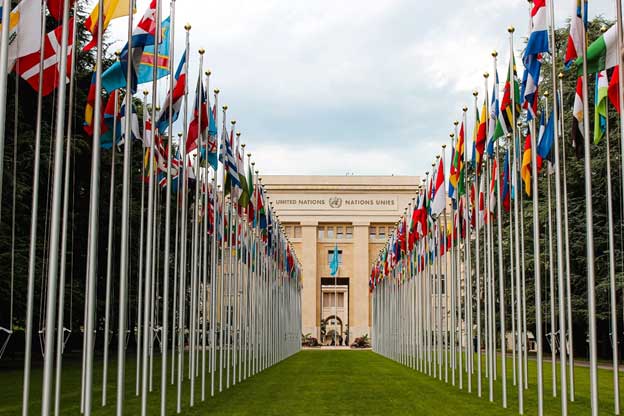 BERLIN/COLOGNE/NEW YORK, Apr 22 (IPS) – One of the most recently established international UN days is the day of multilateralism and diplomacy for peace. First observed on 24 April 2019 to promote UN values and to reaffirm the faith of people in the purposes and principles of the UN Charter, the relevance and the irony of this day is obvious.

On the one hand, COVID-19 vaccine nationalism is causing huge inequities in the supply of lifesaving immunization from reaching disadvantaged people, especially those in the Global South who need them the most amid a global pandemic of epic proportions. On the other hand, aggressive militarism and proliferation of weapons of war by the permanent members of the UN Security Council threatens international peace and security, diverting vital resources that could be used to address inequality and exclusion around the globe.

The need for inclusive and democratic global governance to support the three founding pillars of the UN – peace and security, human rights, and development – remains pressing. Yet, major reforms have been elusive despite a wealth of reports and innovative ideas drawn up by experts and activists.

Over the years, geo-political intransigence of powerful actors and entrenched state interests have remained a major stumbling block. However, a potential breakthrough was achieved in 2020 through a UN General Assembly resolution to commemorate the 75th anniversary of the UN.

The resolution includes a commitment to upgrade the world body and tasks Secretary-General Antonio Guterres to compile a report in 2021 on furthering ‘Our Common Agenda’ with a focus on reinvigorating inclusive, networked and effective multilateralism.

The report is supposed to be submitted to the UN General Assembly by September this year. It’s likely that the report will take into account findings from a year-long global listening exercise undertaken by the UN in 2020.

Over 1.5 million people from 195 countries participated in surveys and dialogues on people’s priorities and expectations from international cooperation. Notably, while the overwhelming majority (97%) saw the work of the UN as indispensable, four out of ten also reported that the UN felt remote from their lives.

People across the world support the UN’s mission but want the institution itself to be more transparent, accountable and participatory. In this spirit, over 80 international, regional and national civil society organisations and networks have come together under an initiative titled “We the Peoples,” drawing inspiration from the opening words of the UN Charter.

Three practical ideas aimed at enhancing the agency of people, elected representatives and organised civil society in global governance lie at the heart of a joint statement on inclusive global governance published by the initiative on 23 April 2021:

First, a citizens’ initiative could be established to mandate key UN bodies including the General Assembly and Security Council to act on matters of global importance following a joint petition signed by a certain number of citizens around the world. Such a mechanism would enable people to have their voices heard and also provide an avenue to shape the agenda of the UN.

Second, people across the world could be given an opportunity for direct representation and voice at the UN through a parliamentary assembly. Deficits in representative democracy that exist in far too many parts of the world are further accentuated at the UN through a state-centric bureaucracy driven model. A parliamentary assembly could help make the UN more accessible to people.

Third, an office of a civil society envoy could be created to identify barriers in participation, spur inclusive convenings and drive the UN’s outreach to the public and civil society organisations. Such a champion could lead the implementation of a broader strategy for opening up the UN to people’s participation and civil society voices while addressing asymmetries in engagement across UN agencies, departments and forums.

Taken together these ideas have game-changing, transformative potential to overcome blockages in the UN system. More than that, they are also supported around the world: both a World Citizens’ Initiative and a UN Parliamentary Assembly were frequently mentioned by people who took part in last year’s UN evaluation exercise, as the UN’s own report testifies.

If implemented in earnest, these three changes will enable the UN to respond more effectively and with greater inclusivity to global challenges such as discrimination, inequality, conflict and climate change. However, their adoption will require visionary leadership and cooperation by political executives and the UN’s top management. The present system is stymied by bureaucratic approaches and a lack of imagination.

There’s clearly an opportunity to strengthen and revitalize multilateralism by enabling input and participation beyond member states. The UN needs to be fit for purpose for our times. However, a new more participatory era will require a leap of faith and courage of conviction.

Andreas Bummel is Executive Director of Democracy Without Borders based in Berlin; Caroline Vernaillen is the Global Manager for PR and Community Building at Democracy International based in Cologne; and Mandeep Tiwana is Chief Programmes Officer at CIVICUS based at their New York office.